With Nathan MacKinnon sidelined, Avs must deal with red-hot Bruins 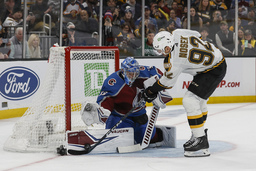 The Colorado Avalanche head home after a four-game road trip with plenty of injury issues.

Colorado has played most of the season without Gabriel Landeskog and Valeri Nichushkin, as well as a revolving door of injured players in and out of the lineup. Now the Avalanche have lost their best player for an extended time after Nathan MacKinnon was hurt at Philadelphia on Monday night.

Now, its time for a rematch with the hottest team in the NHL.

The Boston Bruins, who had their 14-game home winning streak ended in a 4-3 shootout loss to Vegas on Monday night, are in Denver on Wednesday to face Colorado four days after beating the Avalanche 5-1 in Boston. The Bruins have three regulation losses and only one in the last five weeks.

Boston has been dominant at home and good on the road, where it will play the next three games, starting in Colorado.

"We have a veteran team that knows how to play on the road," Bruins coach Jim Montgomery said. "We haven't scored as much on the road as we had at home, but that's probably normal. We've had a couple back-to-backs on the road that we've played well in games -- managed -- like Columbus, and we went into Buffalo and came back home. I think our game doesn't change, and that's what I like is that our identity is the same -- we check hard, and we try to make plays."

The Bruins will have forward Craig Smith available after he missed the previous three games with an upper-body injury.

The Avalanche aren't so lucky. MacKinnon, the team's leading scorer with 34 points in 23 games, was hurt in the first period against the Flyers, went to the locker room and didn't return. He was ruled out after the second intermission.

The nature of the injury wasn't revealed but head coach Jared Bednar told a local radio show Tuesday morning that MacKinnon will "miss some time."

Forward Artturi Lehkonen, who has been on the top line with MacKinnon and Mikko Rantanen, missed Monday's game with an upper-body injury suffered Saturday night at Boston. His injury is considered day to day.

"Feels like everyone's kind of getting a knock," Alex Newhook said after the loss to Philadelphia. "Got to play through some things."

The rash of injuries throughout the season has forced Colorado to shuttle players up from the Colorado Eagles of the AHL. One, Charles Hudson, made his Avalanche debut against Philadelphia, while Jayson Megna and Alex Galchenyuk played Monday while on waivers.

Megna was claimed by the Anaheim Ducks on Tuesday, so the Avalanche will be forced to plug another hole in the lineup.

Colorado has played just nine home games so far, and one of those was held in Finland last month. The Avalanche will play 10 of their next 13 games at home, which might help if the pipeline to the Eagles, who play an hour north of Denver, is needed.

"I think everyone's excited to get home for a few games," Newhook said.