For Hurricanes, home ice key in Game 2 vs. Rangers 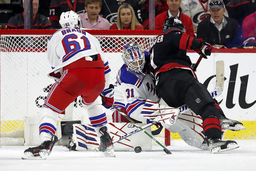 The Carolina Hurricanes will look to continue to feast on home cookin' in the playoffs Friday when they host the New York Rangers in Game 2 of their Eastern Conference semifinal series.

The Hurricanes have won all five playoff games this spring in Raleigh, N.C. They have outscored the opposition by a 20-7 margin and killed off 92.3 percent of their foes' power plays.

Sebastian Aho scored late in the third period and defenseman Ian Cole tallied 3:12 into overtime to lift Carolina to a 2-1 victory over New York in the series opener on Wednesday. Cole scored his second career NHL playoff goal after his wrist shot from above the right faceoff circle caromed off the stick of Rangers defenseman Ryan Lindgren and past Vezina Trophy finalist Igor Shesterkin.

"It's not necessarily about this game," Cole said. "It's about building toward that journey, going forward. We're not here to win one game in the second round and say 'OK, that's it, mission accomplished.' We're here to win a Stanley Cup. This is a great step forward and I think it showed our resiliency as a team to be able to check ourselves and fix our game during the game and not have to wait until after the game."

The Metropolitan Division-champion Hurricanes answered a 14-shot total over the first two periods by registering the first seven in the third.

"We obviously raised the level of intensity in our game. We played with a little more desperation, which we needed," Carolina coach Rod Brind'Amour said. "We were lacking a little of that for two periods. It doesn't always work out, but we had a real good third period and that got us back in the game. Then it carried into overtime."

Carolina's Antti Raanta, a former Rangers backup goaltender, stopped 27 of 28 shots to record his fourth win of the postseason in which he yielded two goals or fewer.

Raanta's lone blemish came after Filip Chytil scored at 7:07 of the first period. Fellow "Kid Line" member Alexis Lafreniere notched an assist, marking the fifth point of the postseason for the top overall pick of the 2020 NHL Draft.

While the Hurricanes won Game 1 for the second straight series in these playoffs, the Rangers find themselves trailing after the opener for the second consecutive time. New York fell in triple overtime in Game 1 of its first-round series to Pittsburgh and overcame a 3-1 deficit in games to eliminate the Penguins.

"We've been in this position," Chytil said. "So we just have to keep our heads up and we got a day off (Thursday), we practice, good meetings and just get ready for Friday's game. I think we can take a lot of positives from this game. I think (for) two-and-a-half periods we play (how) we want to play and we dictated the tempo of the game.

"Unfortunately, they scored a goal. We have to build on this game and take all the positives to another game."