Flames stare down elimination in G5 vs. Oilers 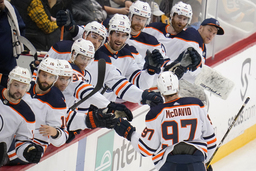 The challenge to the Calgary Flames is extremely simple heading into Thursday's home clash with the Edmonton Oilers: Win or the season is over.

Trailing 3-1 in the best-of-seven Western Conference second-round series, the Flames are in last-chance territory to keep their Stanley Cup hopes alive. They must win three straight games against an Oilers squad that took control of the series with Tuesday's 5-3 win.

"It's up to us to see what we're made of and go out there and play our game for 60-plus minutes, if that's what it takes, to give ourselves a chance to stay alive," veteran forward Milan Lucic said.

"When your backs are against the wall, your desperation goes up and you see what your team is really made of. That's something all our energy and all our focus has to go into."

The Oilers deserve full credit for leading the series, but the Flames have done themselves no favors. Calgary blew a two-goal lead in a Game 2 loss and are guilty of a stream of penalties that has given the Oilers momentum, even if they didn't net power-play goals.

Even Calgary's top performers have produced very little, at least a pair of them.

Matthew Tkachuk scored three goals in the series opening 9-6 win but has just one point since. Johnny Gaudreau -- tied for second in the league in scoring with 115 points during the regular season -- was blanked the past two games.

Those two, both 40-goal scorers in the regular season, must lead the way in any comeback, although coach Darryl Sutter is working to limit his players' focus.

Edmonton owns a 14-1 record when leading a series 3-1, while the Flames are 0-9 when in their current situation.

The Oilers, who are one win from making the conference final for the first time since 2006, are on the other side of the coin when it comes to their star players.

Connor McDavid has amassed 25 points (six goals, 19 assists) in 11 playoff games and has recorded multi-point performances in seven consecutive games -- one shy of the record -- and in 10 of 11 outings. Leon Draisaitl is the first player in NHL history to post four consecutive three-point playoff games.

The contributions don't end there. Evander Kane is the first player in history to boast five multi-goal games within his team's first 11 contests of a postseason, while Zach Hyman has scored seven goals.

All of that firepower has the Oilers believing in themselves, a big reason they recovered after blowing a three-goal lead en route to Tuesday's win. The lead disappeared when goaltender Mike Smith surrendered the game-tying tally on a shot from the Calgary zone.

"I thought after that goal went in, we put our nose back to the grindstone and found a way to get the winning goal," coach Jay Woodcroft said.

While the Flames are feeling the noose tightening around their necks, the Oilers are playing with confidence, even when things go awry.

"We've gone through some adversity this year," said forward Ryan Nugent-Hopkins. "The way that we've stuck together and (come) out the right end of it ... shows the character that we have in that room and the resilience we have in the group."