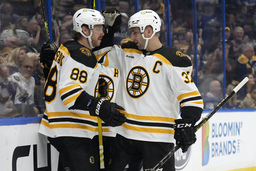 The Boston Bruins, who have the most victories and the highest point total in the NHL this season, will put their seven-game win streak on the line on Wednesday night in a visit to the Florida Panthers in Sunrise, Fla.

Florida, which finished last season with the best record in the league, is off to a mediocre start at 9-8-2.

Boston, an incredible 17-2-0, is coming off a 5-3 win over the host Tampa Bay Lightning on Monday. In that game, Bruins center Patrice Bergeron became just the fourth Boston player to reach 1,000 career points.

"(Bergeron) is just so dedicated to playing the game the right way and helping the team have success," Montgomery said.

Montgomery was brought in to replace coach Bruce Cassidy after the Bruins finished fourth in the Atlantic Division last season and got eliminated in the first round of the playoffs.

The core group of Bruins players is unchanged from the 2021-22 season, making this start all the more remarkable.

David Pastrnak leads the Bruins in goals (12) and assists (17). Bergeron is second in goals (nine), and his 18 points are tied for second with defenseman Hampus Lindholm, who is on pace for a career year.

Starting goalie Linus Ullmark (13-1-0) leads the league in wins and goals-against average (1.96). In fact, he is halfway toward tying his career high in victories, set last year.

Meanwhile, the Panthers are still adjusting after making a couple of big offseason decisions, trading away homegrown star Jonathan Huberdeau and bringing in Paul Maurice as coach.

The Panthers also traded valuable defenseman MacKenzie Weegar in that same deal, which brought back power forward Matthew Tkachuk from the Calgary Flames.

So far, it hasn't clicked. The Panthers will enter Wednesday on a three-game losing streak (0-2-1), allowing 15 regulation goals during that span.

Tkachuck has done his part, leading Florida in assists (17) and points (25). Carter Verhaeghe, who scored a career-high 24 goals last season, leads the Panthers with 11 tallies, putting him on pace for a career year.

But some of Florida's other big guns have been somewhat subdued so far, including Aleksander Barkov (four goals), Sam Reinhart (five) and Sam Bennett (five).

It's been frustrating for the Panthers, who earlier this season had to endure 11 games without their top defenseman, Aaron Ekblad, while starting goalie Sergei Bobrovsky has struggled (4-5-1, 3.62 GAA).

The Panthers are coming off a 5-3 loss to the Columbus Blue Jackets on Sunday. In that game, Florida had 50 shots on goal and still lost despite Columbus putting only 23 on net.

"We've got to get some people in front of the net to score some hard, ugly goals," Maurice said. "We're having a hard time completing plays around the net."