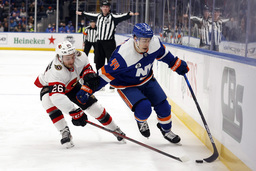 "It's been a process for us this year," New York coach Barry Trotz said. "It's just been a very difficult year in a lot of ways."

Despite a 26-save performance from Anton Forsberg, Ottawa has lost two out of its last three and three of five overall. Nick Holden scored the lone goal for the Senators.

"We played right 'til the end which is important," Holden said. "No point did we stop playing our game."

Ottawa struck first on Holden's second goal of the season just 1:56 into the game. The sequence began with Brady Tkachuk winning a battle along the boards for a loose puck, then finding a streaking Tyler Ennis with a pass. Ottawa's right wing tapped a pass over to Holden, whose shot took an odd bounce over Sorokin before landing behind the goal line.

"I was fortunate that (I) put it over a shoulder and it kept rolling and rolling," Holden said.

Despite the suboptimal start, the Islanders were the better team for the majority of the opening 20 minutes, culminating in Beauviller scoring his seventh goal of the season with two minutes left to tie the game at 1.

"It was pretty huge," Trotz said. "That got us to even ground after one and then I thought our game ramped up."

The deadlock lasted until Wahlstrom swept a loose puck under Forsberg at 8:42 of the second. Walstrom's 10th of the season came less than a minute after Sorokin made a spectacular lunging save on Alex Formenton.

Sorokin kept New York in the lead by knocking aside an Ennis attempt with 7:07 left in the period.

"He was big again," New York defenseman Scott Mayfield said. "He's been doing that all season for us. He makes the saves he has to and then he makes the extra special ones, too. When he's going like that and we can provide some offense for him, it's a good night."

Barzal extended the Islanders' lead to 3-1 with a one-timer off a Scott Mayfield assist at 15:50 of the second.

Any hope the Senators had for mounting a comeback were quashed after Pelech lifted a backhander over Forsberg 7:44 of the third.

New York has won the first two regular season matchups between the Eastern Conference teams. They will finish the season series Mar. 24 at UBS Arena.

Ryan Pulock returned to New York's lineup after having missed 25 games with a lower body injury. Pulock, who entered the match having averaged 21:07 of ice time in 12 games this season, played 14:24 against Ottawa.

"We're going to monitor that," Trotz said Tuesday during his media availability following the Islanders' optional skate at their practice facility. "I think you'll probably see him play five-on-five when he gets back and a little bit of power play. We'll probably limit his minutes."

Sebastian Aho was assigned to the taxi squad in the corresponding roster move.

Despite entering the game with consecutive losses, Ottawa has improved. After beginning the season 4-14-1 in October and November, the Senators won half of the 20 games (10-7-3) they played in December and January.

"Let's give credit where it's due: the goaltending," Ottawa coach D.J. Smith said before the game. "It's been outstanding. If you ask any coach in the NHL the number one thing you need is goaltending, and that's happened back-to-back months here; some exceptional performances by both (Forsberg and Matt Murray). And some hard efforts by a lot of players. Over the last month - we've had some injuries - but we've had some lines that started to gel."

This was Ottawa's first visit to Long Island since Nov. 5, 2019, a span of 820 days. . Casey Cizikas returned to New York's lineup after missing Sunday's 4-3 loss to Minnesota with what the team referred to as a "non-COVID illness."

Senators: Don't play until after the All-Star break; host New Jersey on Feb. 7.

Islanders: Host Seattle on Wednesday. The game had previously been scheduled for Jan. 29, but the NHL postponed it due to a winter storm that left parts of Long Island under 2 feet of snow.