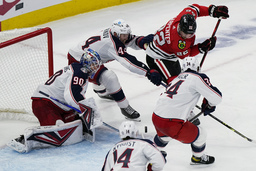 Boone Jenner, Yegor Chinakhov and Max Domi each had a goal and assist for Columbus, which has won three of four to move above .500 at 24-23-1. Oliver Bjorkstrand also scored as the Blue Jackets took the finale of a five-game road trip to go 4-1-0 on the swing.

Laine's first hat trick with Columbus extended his points streak to eight games, matching the second-longest of his career. The fleet Finnish forward has 10 goals and six assists in the span, and 16 goals on the season.

"You see how he scores the goals, a guy like him how he can get streaky and hot," Columbus coach Brad Larsen said. "It's impressive to watch."

Laine connected on three of five shots in this one.

His first goal - on a shot on a sharp angle off the right boards - hit the side of the net, then somehow caromed off Chicago rookie goalie Arvid Soderblom and slithered just over the goal line. It was confirmed per video review.

"I still don't know how it ended up being a goal," Laine said. "It just seems like right now, just shooting it on net and it finds its way in somehow.

"I've just got to keep shooting."

Laine's second goal came on one of his wicked releases from the top of the slot off a faceoff win by Jenner. Soderblom had no chance.

The third was an empty-netter with 5 seconds left.

"It's awesome," said Jenner, who along with Larsen called out Laine's strong play at both ends of the rink. "He's on fire and he deserves it.

"He's playing well on the other side to the puck, too. And obviously he's dangerous with that shot. He's scoring in different ways."

Elvis Merzlikins made 28 saves for the Blue Jackets, who are 6-2-0 in their last eight.

Philipp Kurashev and Ryan Carpenter each had a goal and an assist for the Blackhawks, who had won six straight against Columbus. Alex DeBrincat notched his team-leading 29th goal and MacKenzie Entwistle also scored.

The 22-year-old Soderblom made 30 saves his second NHL start and third appearance.

The Blackhawks came up short in the opener of a six-game homestand that's critical to any hope of them climbing into playoff contention.

"Guys were not ready to play and kind of easing their way into it," Chicago interim coach Derek King said. "You can't do that when have a young goalie in there.

"You've got to be ready when the puck drops and we weren't. The poor kid was left out hanging out to dry. Not very nice."

Jenner and Chinakhov scored 13 seconds apart in the first to give Columbus a quick 2-0 lead.

Jenner batted in the rebound from midair for his 20th goal to open the scoring during a power-play 6:58 in. Chinakhov beat Soderblom on the stick side at 7:11 for a two-goal lead.

Kurashev's power-play deflection at 10:24, then Carpenter's breakaway conversion just over four minutes later pulled Chicago into a 2-all tie.

Domi ripped in a shot from the right circle with 3:05 left in the first to restore the Blue Jackets' lead at 3-2.

Laine scored his fluky first goal from the short side just 9 seconds into the second to make it 4-2. It was the Blue Jackets' fastest goal ever at the start of a period.

Entwistle tapped in Calvin de Haan's deflected shot with 1:58 left in the second to cut it to 4-3.

Laine ripped in a shot from Jenner's faceoff win to make it 5-3 at 7:58 of the third. DeBrincat replied with his 29th goal a minute later to close it to 5-4.

Laine completed his hat trick with the empty-netter.

Chicago top defenseman Seth Jones skated against the Blue Jackets, his team for the six previous seasons, for the first time since the Blackhawks acquired him in a trade last July. Jones was in COVID-19 protocol when the teams met in Columbus on Jan. 11.

Jones narrowly missed scoring late in the second when he cut to the net and tipped Patrick Kane's feed off the post.

NOTES: Jenner reached 20 goals for the second time in his career and the first since 2015-16 when the Columbus captain had 30. ... Blackhawks captain Jonathan Toews has resumed skating missed, but missed his seventh game while in the concussion protocol. ... Columbus G Joonas Korpisalo is day to day with a lower-body injury. J-F Berube was recalled from Cleveland of the AHL to take his spot as backup to Merzlikins. ... The United Center, which seats 19,717 for hockey, was only about half-full on a snowy night.