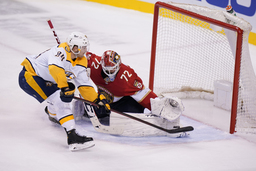 SUNRISE, Fla.- (AP) Mikael Granlund scored the go-ahead goal in the third period and the Nashville Predators snapped a four-game losing streak with a 6-4 win over the Florida Panthers on Tuesday night.

Granlund's power-play goal gave the Predators a 5-4 lead with 5:31 left in the third. Jeannot added an empty-netter with 1:32 left for the final margin.

"We knew what we needed to do, we were playing good hockey," Jeannot said. "We stuck with it and had a good result."

The Predators overcame deficits of 1-0, 3-1 and 4-3 to record their first win in five games.

"We don't want to get too high, or too low," Jeannot said. "When the games weren't going our way these past few games, we didn't get too low. We played hard and got the win."

Sam Reinhart had a goal and an assist, Radko Gudas scored his first of the season and Sam Bennett and Aaron Ekblad added scores for Florida. Jonathan Huberdeau had two assists and Sergei Bobrovsky made 27 saves as the Panthers lost at home for the first time in 10 games and just the fourth time this season.

"We had chances to bury the game and really take control, and we let them back in," Bennett said. "They pushed hard, they battled hard, but we can't let them back in games that easy."

Bennett broke a 3-3 tie when he jammed in a loose puck from in front at 8:11 of the third to make the score 4-3. Nashville appeared to have tied the score 11 seconds later on a shot into the net by Luke Kunin, but the Panthers challenged for goalie interference and the goal was disallowed.

Jeannot's short-handed goal tied the score 4-all at 10:41 of the third.

"That was a big goal," Nashville coach John Hynes said. "We were tied (before the goal was disallowed) and he comes up with a big play at a key time."

Gudas put the Panthers ahead 2-1 when his shot from the point got past Rittich at 1:54 into the second.

Ekblad stretched the lead to 3-1 when he flipped the puck over Rittich at 9:42 of the second.

"We got what we deserved tonight. We weren't smart enough in key moments," Panthers interim coach Andrew Brunette said.

Reinhart gave the Panthers a 1-0 lead with a power-play goal 6:45 in. Reinhart brought the puck out from behind the net and bounced it off the far post and into the net.

Forsberg came from behind the net and swept in a loose puck in the crease at 12:06 of the first.

NOTES: Florida was playing at home for only the third time in the last 38 days. The game started a five-game homestand for the Panthers, who will then play nine of their next 10 and 17 of their final 27 games on the road. ... It was the first Florida-Nashville game of the season. The Predators still have yet to face Ottawa, Philadelphia, Pittsburgh and Tampa Bay. Nashville is scheduled to play the Lightning on Saturday at Nissan Stadium in the latest Stadium Series game. ... Florida has yet to face Anaheim and Toronto this season. . On Oct. 13, 1998, Panthers interim coach Andrew Brunette scored the first goal for the expansion Predators in a 3-2 win over the Carolina Hurricanes.