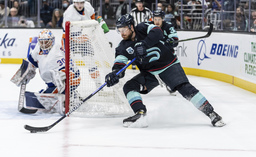 SEATTLE (AP) Zach Parise scored twice and added an assist, Brock Nelson scored for the third straight game, and the New York Islanders opened their road trip with a 5-2 win over the Seattle Kraken on Tuesday night.

New York won for just the second time in the last six games, jumping out to an early lead and overwhelming the Kraken, who were playing their third game in four nights. Seattle has lost five straight.

Parise had his first multigoal game since Jan. 14, 2020, when he was playing for Minnesota against Pittsburgh.

"His numbers aren't staggering the last couple of years, but it's the other parts of this game that are so valuable," Islanders coach Barry Trotz said.

Kyle Palmeri scored his fourth goal in his last four games and Casey Cizikas added his fifth of the season after a rebound off the end boards as the Islanders built a 4-0 lead.

Mathew Barzal was a nuisance all night and assisted on Parise's goal late in the first period. Barzal played four years of junior hockey for the Seattle Thunderbirds, leading them to the Western Hockey League championship in his final season.

"It seemed like he was pretty excited to be back here in Seattle, a lot of Thunderbirds jerseys with `Barzal' on it," Parise said. "He was flying right from the beginning."

Nelson's goal at 8:53 of the first period was his team-best 18th of the season and just the second time in the last 13 games the Islanders scored first. Parise's first goal was initially waived off for goalie interference, but the Islanders challenged the call and it was overturned on video review.

Ilya Sorokin made 23 saves and was barely tested for the first 30 minutes of the game. When Cizikas gave the Islanders a 4-0 lead at 10:33 of the second period, the Kraken had just six shots on Sorokin.

"We didn't have a lot of energy early, and we needed to somehow give ourselves that injection of life with something early offensively," Seattle coach Dave Hakstol said. "And we couldn't find that."

Meanwhile, Seattle goaltender Philipp Grubauer was peppered with shots from the start and made 31 saves. Grubauer posted the first shutout in franchise history earlier this month in a 3-0 win over the Islanders in the last game before the All-Star break.

"We weren't killing plays quick enough and it's tough to break the puck out when you can't do that," Seattle forward Yanni Gourde said. "Once we got going and were better in structure and got the puck in the (offensive) zone, we can see how much better of a team we are."

Gourde scored unassisted off a faceoff for Seattle late in the second period for his 11th goal of the season and Riley Sheahan scored early in the third period, thanks to an awkward bounce off the end boards. The Kraken had two great chances from Morgan Geekie and Vince Dunn moments later that were saved by Sorokin.

"He made a couple of huge saves," Trotz said. "It was probably a difficult game for him because he didn't have a lot of work for the first 30 minutes, and then the last 20 or so we gave him a lot of work."

Islanders defenseman Zdeno Chara tied the NHL record for most games played by a defenseman when he took the ice in the first period. Chara appeared in his 1,651st game, tying him with Chris Chelios for most games by a defenseman. Chara, who will turn 45 next month, debuted during the 1997-98 season with the Islanders. He also played with Ottawa, Washington and spent 14 seasons with Boston.

Chara got the assist on Parise's empty-net goal.

NOTES: Seattle scratched D Carson Soucy and F Jonas Donskoi. Donskoi had appeared in 51 of 52 games. ... New York G Semyon Varlamov was activated from COVID-19 protocol. Varlamov was placed in protocol on Feb. 12. ... Seattle coach Dave Hakstol said there could be an update coming in a few days on the timeline of F Jaden Schwartz. Schwartz has missed 22 games following hand surgery, but has resumed skating.

Islanders: At San Jose on Thursday.