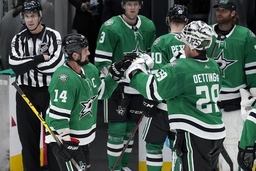 DALLAS (AP) Tyler Seguin and the Dallas Stars celebrated before they got the official word on his game-winning goal in overtime.

They saw the puck clearly over the line on the video board above the ice.

Seguin scored 54 seconds into the extra period on a play that required a review, and the Stars beat the Winnipeg Jets 3-2 on Wednesday night.

The winning play came moments after Jake Oettinger made a pad save 1-on-1 against Josh Morrissey at the other end. Dallas captain Jamie Benn, who had a goal, secured the puck and went the other way with Seguin, who also had an assist.

"We're just trying to do our part," Benn said of the second-line pairing of high-scoring forwards who have struggled to produce points at times. "We can be a really good second line on this team. Need to bring that offensive side of our game when we play at home, and especially on the road."

Dallas beat Winnipeg for the sixth consecutive time at home in the fourth straight game between the Central Division clubs to go to overtime or a shootout, including all three this season.

"Every time we play these guys, we have good games, hard games, close games," interim Jets coach Dave Lowry said. "Obviously with where both teams are positioned in the standings, it was going to have the make-up of a real tight, heavy game."

Both captains opened the scoring for their teams, with Benn scoring short-handed in the second period to answer Blake Wheeler's goal in the first in the first.

Mark Scheifele scored early in the third period for Winnipeg, and Denis Gurianov got Dallas even again with less than seven minutes remaining. Neal Pionk had two assists for the Jets.

On the winning sequence, Seguin's shot in transition was stopped by Connor Hellebuyck, and the goalie reached for the puck in midair as Seguin sent it back toward the goal.

The original call was that Morrissey had kept the puck out the net with his stick, but a video review after the play showed the puck across the goal line. Seguin is the seventh different Dallas player to score in seven overtime victories.

The Stars were sure of it as soon as they saw the replay, but the officials still waved them back to their bench as they streamed onto the ice to greet Oettinger. The 23-year-old made 20 stops in his fourth consecutive start after recording a 0.98 goals-against average in the previous three outings. Hellebuyck had 36 saves.

Both teams are trying to work their way into the Western Conference playoff picture, and the Stars are in position because they've been so much better in extra time than last season.

Dallas is 10-2 in overtime and shootouts after going 6-14 in the shortened 2020-21 season. The struggles in extra time last season were a big reason the Stars missed the playoffs when they were defending West champions.

"You're going to be hearing it every game pretty much here on out that this could be a four-point game here, and it's going to be playoff-type game, and that was tonight," Seguin said. "They're scratching and clawing trying to chase us, and we're trying to do the same to Nashville."

Scheifele scored on a power play in the second period moments after it appeared he could have been called for high-sticking against Benn.

Scheifele and Benn converged for a loose puck, and Benn crumpled to the ice after the stick appeared to make contact with his face. Benn got up, but Scheifele was alone in the left circle soon after for a one-timer that beat Oettinger.

Coach Rick Bowness was among several on the Dallas bench complaining about the apparent non-call, and Benn was still dabbing at his mouth with a towel after play had resumed.

Gurianov pulled Dallas even with about seven minutes remaining when he scored into an open net from the crease on a nifty pass from Seguin, who has 50 points in 43 career games against the Jets.

The teams had traded overlapping penalties without scoring in the second period when Dallas' Michael Raffl was called for hooking. Pionk turned it over just inside the blue line to Roope Hintz, who took off on a 2-on-1 with Benn. The captain took a late pass and beat Hellebuyck between the legs.

NOTES: The crowd was sparse because of freezing weather and slick roads in the Dallas area. The announced attendance was a season-low 10,098. ... Benn extended his home point streak against Winnipeg to nine games. ... Five of Wheeler's six goals this season have come in the 15 games since his return from a nine-game injury absence.

Jets: At Colorado on Friday. Winnipeg lost to the Avalanche 7-1 in its other visit this season.

Stars: At Nashville on Thursday to finish their first back-to-back in almost a month.