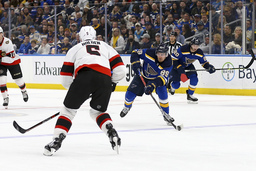 ST. LOUIS (AP) Tim Stutzle and Josh Norris each scored a power-play goal, sparking the Ottawa Senators to a 4-1 victory Tuesday over the St. Louis Blues.

"We really emptied the tanks to get a win tonight," Tkachuk said. "This is unreal. I think it's our best effort we've had all year. Everybody was buzzing. Everybody was on their game. "

David Perron scored the lone goal for St. Louis, which is 0-3-1 in the last four games - the Blues' longest losing streak of the season.

"It's not always pretty, right?" Blues defenseman Justin Faulk said. "Sometimes you get in these funks where you just need to kind of put your nose to the grindstone and just work."

Blues goalie Jordan Binnington had 24 saves, but left the ice with 3:35 remaining.

Stutzle's power-play goal on a backhander at 11:35 of the first period gave Ottawa a 1-0 lead. Perron's turnover followed by a tripping penalty against Tkachuk gave the Senators a man advantage.

It was the fifth time in last six games the opposing team has scored first on the Blues.

"We're in a funk. We hit adversity usually at some point through 82 games. Most teams hit it and right now, it's obviously us," St. Louis center Brayden Schenn said. "Is the timing ideal on it? Probably not. But I think it's gonna make us better in the long run. It's not gonna be smooth sailing for all 82."

Perron made up for his mistake, tying it with about five minutes left in the first on a backhander after getting the puck from Ryan O'Reilly.

Ottawa connected on its second power-play goal at 1:34 in the second period when Norris scored. Stutzle passed to Norris, who blasted the puck with a slap shot from the right faceoff circle under the arm of Binnington for a 2-1 lead. It was Norris' ninth power play goal this season and 20th overall goal.

St. Louis, which had won six of its previous seven games against the Senators, had just three shots on goal in the second period.

"I thought it was one of our better second periods in a long time," Ottawa coach D.J. Smith said. "We put a lot of miles on them."

"We gave up that goal, almost killed the power play off and give up the goal, kind of put us on our heels for a little bit there," Berube said. "We didn't get much going in the second."

Forsberg made a huge save when he stretched fully to snag a wrist shot with his glove hand from the slot by Vladimir Tarasenko less than 2 minutes into the third period.

"I don't know really what happened," Forsberg said. "I heard a pass behind the net. Before I turned my head, I heard it go off his blade. I just got my glove out there. It was kind of lucky."

Tkachuk, made it 3-1 in the third when he scored on a wrist shot at 7:48. His father, Keith, an ex-Blue, was seen on the videoboard watching from a skybox. Tkachuk leads the Senators with 40 points on the season.

"Absolutely, it's special being here. I don't get to play here too often," Tkachuk saidd. "When I do, it's definitely special. I'm happy with the outcome and just the way we played. It was a lot of fun tonight."

"We had everyone going," Smith said. "We rolled four lines. The `D' and the goaltending continues to be great. When you get that kind of goaltending, you have a chance every night."

Tuesday's game marked the first Blues' first regular-season game this year without any COVID-19 protocols. Masks no longer are mandatory for Blues games and proof of vaccination no longer is required, per city of St. Louis health guidelines.

There was a videoboard tribute and applause for ex-Blue Zach Sanford in his first game back in St. Louis since he was traded for C Logan Brown last September. Brown was a healthy scratch for the game. ... This was Ottawa's first visit to St. Louis since Jan. 19, 2019, when the Blues won 3-2. St. Louis is the lone team Ottawa did not visit during the 2019-20 or 2020-21 seasons.

Senators: G Matt Murray (undisclosed) has been placed on injured reserve following a collision against Arizona on Saturday. Murray has lost six straight starts. ... Other Senators who remain on the IR are RW Drake Batherson, C Shane Pinto and C Chris Tierney.