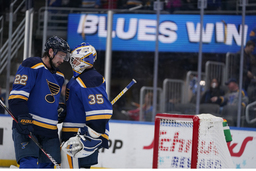 David Perron, Jake Walman, Ivan Barbashev and Ryan O'Reilly also scored for the Blues, who were 0-3-1 in their skid and remained two points ahead of Minnesota in second place in the Central Division. Ville Husso made 27 saves to improve to 14-4-3 on the season.

Ryan Strome and K'Andre Miller scored for the Rangers. Igor Shesterkin gave up four goals on 17 shots before he was replaced by Alexander Georgiev.

"You get frustrated and hope you wake your guys up," Rangers coach Gerard Gallant said, "It didn't really, but they should be embarrassed a little bit, the way this guy plays for them all year, and then they come out here and play like that after a game in Minnesota that we weren't too good in."

Georgiev finished with 16 saves as the Rangers lost their second in a row after winning three straight.

"I just thought it was too many high quality scoring changes," Rangers defenseman Jacob Trouba said. "I think that was the message. It's definitely not on Igor. He's been there for us all year, so it's definitely on the players."

Thomas tapped in a feed from Jordan Kyrou past Shesterkin for his ninth goal of the season to put St. Louis up 1-0 with 6:55 left in the first period.

Barbashev scored his 18th goal of the season 45 seconds later on a pass from Brandon Saad to expand St. Louis' lead to 2-0.

Thomas followed with his second goal of the game and career-high tying 10th of the season with 4:19 remaining in the first to make it 3-0.

"It seemed to be clicking," Thomas said. "We've struggled getting scoring chances and stuff lately. It was nice. Everyone was contributing. We were playing the right way and we just built momentum throughout the game."

Strome scored his 13th goal of the season on a power play with 1:23 remaining in the period to get the Rangers on the scoreboard.

O'Reilly roofed his 13th over Shesterkin 15 seconds into the second to put St. Louis up 4-1 and end Shesterkin's night.

Walman, a last-minute addition to the lineup, scored his third of the season on a delayed penalty at 7:07 to make it 5-1 and Perron added his 14th just 38 seconds later for a five-goal lead.

Miller scored his fifth goal of the season on a power play with 7:37 remaining in the second close the scoring. Artemi Panarin assisted on the goal giving him assists in four straight games.

"We were a little, whether it's lackadaisical or not fully dialed in, we're making little mistakes in the D zone and it's costing us right now." Rangers forward Barclay Goodrow said. "We have to learn from those but also turn the page."

US women's hockey goaltender Alex Cavallini was in attendance. Cavallini was a member of the silver medal 2022 Olympic team and won a gold medal with Team USA in 2018.

Blues LW Pavel Buchnevich was scratched as he remains in concussion protocols after taking a shot to the head Tuesday night against Ottawa. ... C Logan Brown returned to the lineup after being a healthy scratch for St. Louis' last seven games and 14 of the team's last 15 games. ... C Tyler Bozak (non-COVID illness) was a late scratch after participating in the morning skate forcing St. Louis to dress seven defensemen and 11 forwards.

Rangers: At Dallas on Saturday night to conclude a four-game road trip.

Blues: At Nashville on Saturday.