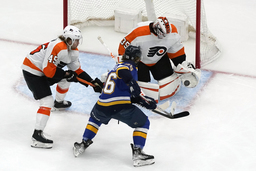 ST. LOUIS (AP) Travis Konecny scored twice, Hayden Hodgson had a goal and an assist in his NHL debut and the Philadelphia Flyers beat the St. Louis Blues 5-2 on Thursday night.

The Flyers snapped a 13-game winless streak on the road, winning away from home for the first time since Dec. 29 at expansion Seattle.

"I'll say we were due, that's for sure," Flyers interim coach Mike Yeo said. "But you know, especially considering we played a lot of really good road games, we just haven't always gotten wins."

Vladimir Tarasenko and Alexei Toropchenko scored for St. Louis, and Jordan Binnington made 22 saves. The Blues have lost three of four.

"The work ethic wasn't there, the compete level and intensity wasn't there from a lot of guys - I'm very much in that group," Blues defenseman Justin Faulk said. "Didn't have a good game by any means. But that's just not acceptable. We've kind of had that. It's been a little bit of a theme, starting slow and thinking we can score our way through in the seconds and thirds and finding ourselves back in games and then win."

The Flyers had the jump from the start, outshooting the Blues 9-4 and taking a 2-0 lead in the opening period.

"We just wanted to have a good start and not worry about you know what was on the other side," Flyers forward Owen Tippett said. "We just want to play our game and I think we did that. I think we came out strong and you know it's a tough building to come into, so I think we played a full 60."

Konecny gave the Flyers the lead at the 6:27 mark with a quick wrister from the left dot. Kevin Connauton had the primary assist, giving him his first point in 29 games this season.

"I'm just trying to work on a bunch of different things and kind of, you know, become more of a complete player than just one dimensional," Konecny said.

Brown extended the lead with 5:09 left in the first. It was his fourth of the season, snapping a nine-game goal drought.

Seconds after Pavel Buchnevich's turnover, Konecny's slap shot trickled through Binnington's pads to give the Flyers a 3-1 lead with 7:31 left.

"We play well against good teams like in Washington the other night and then we come home and we're playing against the Philadelphia Flyers," Blues coach Craig Berube said. "I don't know if it's arrogance or what it is. But you don't compete in the game, you don't work, you can get embarrassed like we did tonight."

Toropchenko scored for the Blues with 4:00 left in the second, immediately after Martin mishandled the puck behind the Flyers' net.

Hodgson gave the Flyers some insurance, banging home a rebound off Hayes' shot with 8:26 left in the third.

"I just try to play a simple game and make my presence known and just be physical and just be good defensively," Hodgson said.

Yeo said he couldn't draw up a better debut.

"What an amazing experience," Yeo said. "He brings weight, he brings a presence to the lineup. He's confident with the puck."

Blues LW David Perron's career-high seven-game goals streak was snapped, but he got an assist on Tarasenko's goal to give him an eight-game points streak. Perron has points in 11 of his last 12 games and has 19 points (13 goals, 6 assists) during that span.

NOTES: Blues D Torey Krug (upper body) is out week-to-week after suffering the injury at Washington on Tuesday. . Flyers RW Hayden Hodgson made his NHL debut and was credited with an assist on Konecny's goal. . Blues F Tyler Bozak (lower body) was placed on the injured reserve and D Calle Rosen was recalled from Springfield, the team's AHL affiliate.

Flyers: At Colorado on Friday night.