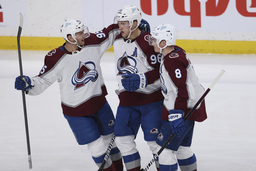 ST. PAUL, Minn. (AP) Kevin Fiala scored 15 seconds into overtime to send the Minnesota Wild to a 3-2 win over the NHL-leading Colorado Avalanche on Sunday night for their sixth straight victory.

Kirill Kaprizov and Ryan Hartman also scored for Minnesota, which is the only team this season with at least three six-game winning streaks. Hartman's tying goal with 5:27 left in regulation sent the game into overtime.

Cam Talbot made 40 saves for Minnesota, extending his own personal win streak to six games.

"You look forward to these game," Talbot said. "The way we've been playing and where they are in the standings, you kind of had this one circled. It's a good measuring stick, especially after we've been rolling here pretty well lately and we need some points in our division.

"These are big games right now and there's no bigger game than against the No. 1 team in the league."

The Wild trail Central-leading Colorado by 14 points in the division, but extended their advantage for second place over Nashville to four points. St. Louis is five points behind Minnesota.

"If you want to get to the Stanley Cup Final, you have to go through them," Fiala said. "So, we don't really care how many points they have. We can beat anybody and that's what we know, not just think. It was just a good test for us and now we can keep going forward."

Nazem Kadri and Mikko Rantanen scored in the third period for the Avalanche, who had won five of their previous six. Colorado, which leads the league in points, wins and point percentage, won the first two meetings in Denver this season.

"I like the way our team played," Avalanche coach Jared Bednar said. "I liked it a lot. I thought it was a good hockey game. I thought our checking game was really good, didn't give up a lot against a dangerous offensive team."

A matchup between two of the top-three teams in goals per game had a playoff-type feel, but lacked explosive offense until the third.

Minnesota went more than 10 minutes of game clock between the first and second periods without a shot, but opened the scoring in the second on the power play.

Jared Spurgeon saved the puck at the blue line to keep the Wild in the zone. Ryan Hartman eventually skated around the back of the net and passed to Kaprizov, who was crashing the net and fit a shot in a small spot between Kuemper and the post.

Kaprizov has 13 goals in his last 15 games. Linemate Mats Zuccarello had three assists Sunday and has two goals and 12 assists in his past 12 games.

Talbot, whose struggles in February and early March led Minnesota to trade for Marc-Andre Fleury at the deadline, stood strong as the Avalanche controlled play.

Colorado outshot the Wild 28-14 through two periods and 42-29 for the game. Talbot has allowed seven goals in his past five starts.

"Everybody talks about games being playoff atmosphere, but that truly was," Minnesota coach Dean Evason said.

"I think we outplayed them most of the game," Rantanen said. "We had a lot of chances in the first two that we didn't capitalize. We couldn't do it and then we fight back and they get one goal in the final five and two power-play goals. I don't know if you look at those penalties. If I comment too much I will be in big trouble, so I'm not going to say anything."

TAKING IT UP A NOTCH

Immediately after scoring his goal, Kaprizov was sent flying into the back of the net on a check by defenseman Devon Toews.

Part of the action in the third was a fight between Avalanche star Nathan MacKinnon and Wild defenseman Matt Dumba. Dumba had leveled Rantanen with a big check and MacKinnon quickly asked Dumba to fight.

"I think everyone knows the rivalry that we have with these guys," Dumba said. "We don't have to say too much. It's a hard Central battle. We know how valuable these points were. We still have to battle and try to chase them and get our home-ice advantage."

Avalanche: Play at Calgary on Tuesday.