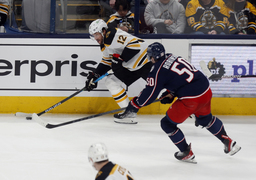 Ivan Barbashev and Brayden Schenn also scored for the Blues, who snapped a four-game losing streak at home to Arizona. Ville Husso made 21 saves as St. Louis won for the fourth time in its last five games (4-0-1).

"We had good sticks tonight I thought," Blues coach Craig Berube said. "I thought our D-zone coverage other than the one goal was pretty solid all around. You know, we didn't give them a whole lot around our net."

Tarasenko has 15 points (six goals, nine assists) in his last 13 games and has a team-high six game-winning goals.

"For me, Vlady's work ethic was the biggest key," Berube said. "He was working without the puck, you know, back checking and those types of things and then offensively he finds ways to get open. That's what he does best. He finished two tonight, could have probably three, but it's good to see."

Nick Schmaltz scored in the third period and Ivan Prosvetov made 24 saves for the Coyotes, who lost for the eighth time in 10 games.

"That was a big-boy game tonight," Coyotes coach Andre Tourigny said. "They were big, fast, on us, they hit, and we had no answer."

St. Louis took control with three goals in a four-minute span early in the second period.

Barbashev gave the Blues the lead at the 2:17 mark. He started the sequence by getting his glove on a Coyotes' clearing attempt and keeping it in the zone before scoring off the rebound of a shot by Calle Rosen.

Tarasenko made it 2-0 just 77 seconds later, burying a one-timer from Robert Thomas' feed from behind the Coyotes' net.

Buchnevich extended the Blues' lead with a short-handed goal with 5:21 left in the second, set up after Ryan O'Reilly forced a turnover at center ice.

Husso capped the dominant period with a glove save on Michael Carcone's breakaway in the final seconds of the second.

"He has stood on his head for us and even when we're not playing well in front of them, he's found a way to keep us in games," Thomas said.

Prosvetov, playing in just his third game this season and first since January 14, stopped all 10 shots in a scoreless first period including a pair of nifty pad saves on point-blank chances by Colton Parayko and Schenn.

"It was a tough night for him in the sense of the workload and the opponent and quality of shot and the goal he gave and all of it," Tourigny said. "I don't think he's by any stretch to blame. The reverse I think, he made a key save in the first, he kept us right there and there's a lot of positives."

Coyotes RW Phil Kessel is approaching several career marks. He is two goals from 400, one assist from 550 and three points away from 950 career points.

Former Blues D Carl Gunnarsson was in town for the first time since retiring after last season. Gunnarsson was a key member of the Blues 2019 Stanley Cup championship team.

NOTES: Craig Berube coached his 259th game, moving him past Andy Murray for fourth most in Blues franchise history. . Coyotes LW Andrew Ladd (lower body) did not play and is day to day. . Blues C Jordan Kyrou (illness) returned after a three-game absence.