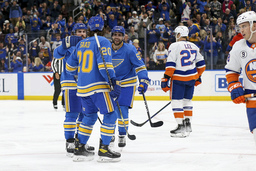 ST. LOUIS (AP) Justin Faulk scored twice in a 96-second span in the second period and Jordan Binnington made 30 saves to lift the St. Louis Blues to their fifth straight victory with a 6-1 win over the New York Islanders on Saturday night.

Grant Hutton scored his first NHL goal for the Islanders, who had won five of their previous six.

"I know you have to get back to work and hold yourself accountable," Binnington said. "It is what it is. I will say that it helps that the team has been winning hockey games. I have to look in the mirror and use this time to my advantage."

Binnington, who was 0-4-1 in his last five entering the contest, made a pair of early saves on Anders Lee and Brock Nelson to keep the game scoreless.

"It's always nice to make a big save early," Binnington said. "It was nice to get into the flow of the game."

The Blues jumped in front on first-period goals by Leddy and Tarasenko. They have recorded at least one point in each of their last eight games (7-0-1) and have scored at least four goals in each game during that streak.

"I thought the guys were dialed in," St. Louis coach Craig Berube said. "Our team was focused, they were ready to play."

Leddy, acquired from Detroit on March 21, blasted a wrist shot from the high slot at 14:21 to kick-start the attack. It was his second goal with his new team. He played the previous seven seasons with the Islanders.

Tarasenko pounced on the rebound of a shot from the point by Colton Parayko just under three minutes later for his team-best 26th goal.

Faulk, a defenseman, muscled back-to-back shots past Semyon Varlamov early in the second period for a 4-0 lead.

"He's a really good pro, he's prepared for what he needs to do every night," Berube said.

Barbarshev says Faulk's offensive surge is adding another dimension to a red-hot offense. Faulk, who added an assist, has scored 13 goals this season.

"It's great he's joining the offense," Barbashev said. "He's been having a great season. I hope it continues."

Thomas, who also added two assists, extended his career-best point streak to nine games with his 18th goal of the season late in the second period. He has six goals and 11 assists during the streak.

"It's the time of the year when we've got to push," Barbashev said. "It's fun to play hockey right now."

New York, which completed a five-game road trip, was coming off a 2-1 win at Carolina on Friday.

Hutton got to keep the puck after his initial goal, which provided the lone highlight for the Islanders

"Fun to get back into the room and have all the guys saying, `Congrats,'" Hutton said.

The Blues moved past Minnesota and into second place in the Central Division with a two-point lead over the Wild. Minnesota has played two fewer games.

Islanders C Casey Cizikas served a one-game suspension from the NHL for a high hit on Brendan Smith in the third period of Friday's game at Carolina.

Blues: Face the Bruins in Boston on Tuesday night.