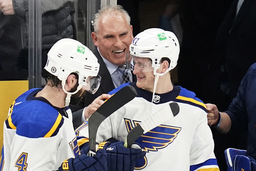 Vladimir Tarasenko scored twice, including the go-ahead goal in the second period, and the St. Louis Blues rallied to beat the Boston Bruins 4-2 on Tuesday night.

Torey Krug and David Perron each finished with a goal and an assist as the Blues (43-20-10) posted their sixth straight victory.

Ville Husso had 39 saves to win his fifth straight start. Robert Thomas added his 48th assist of the season, extending his career-best point streak to 10 games.

For Krug, who spent his first nine NHL seasons in Boston before joining the Blues in free agency prior to the 2020-21 season, it was an emotional night.

"It's been awhile since I've been back here in the building," Krug said. "It was capped off pretty nicely with a win for us. ... For me coming back, I really didn't know what to expect or how I'd feel. ... It meant a lot for me."

Boston (45-23-5) has lost three of its last four since a three-game winning streak. Patrice Bergeron scored his 20th goal of the season, and rookie Marc McLaughlin had his second career goal. Jeremy Swayman finished with 26 saves.

Bruins coach Bruce Cassidy expressed frustration with a troubling recent trend of his team failing to take advantage of opportunities. On Tuesday, that meant missing point-blank chances in close and also going 0 for 2 on the power play. The Bruins are now 0 for 18 on power plays over their last five games

"Lack of execution," Cassidy said. "I think we're selfish. Guys are holding the puck too long wanting to make the play instead of letting the puck do the work. I think those two things are fairly evident."

St. Louis arrived for its first visit to Boston since October 2019 as one of the league's hottest teams, but started slowly against a Bruins squad looking to bounce back after dropping two of three to end a four-game road trip.

Boston played well in the early going, despite being without leading goal scorer David Pastrnak, who missed his fourth consecutive game with an undisclosed injury, along with defensemen Matt Grzelcyk (upper body) and Hampus Lindholm (lower body).

But the loss of defenseman Brandon Carlo just 4:48 into the game with an undisclosed issue proved to be too much for Boston as the game wore one.

The Blues entered with a plus-36 goal differential in the second period and added to it Tuesday.

Trailing 2-1 and on the power play, Krug got his stick on a loose puck, weaved his way through Boston's defense and tied it up with his shot into the top of the net from the middle of slot. Barely three minutes later, Tarasenko was wide on a break when he received a pass from Thomas, spun and fired in his 27th goal of the season to make it 3-2.

The puck was flying around early, with both teams scoring in the first minute of action.

The Blues needed just 34 seconds to get on the board after Ryan O'Reilly led a 2-on-1 breakaway and fed the puck ahead to Perron, who put away a backhander past Swayman.

Boston responded just 15 seconds later after Brad Marchand skated behind the net and wrapped a pass around to Bergeron positioned high on the slot. He quickly gathered and flipped in his 20th goal of the season.

St. Louis appeared to nudge back in front with 4:09 left in the first via a Krug shot from the point that ricocheted off Swayman's shin guard and trickled into the net.

But the goal was taken away after the Bruins successfully challenged the play for offsides.

Boston promptly took a 2-1 lead with 3:01 remaining when rookie McLaughlin slid in to put away a snap shot off assists from Erik Haula and Connor Clifton.

The teams combined for 33 shots in the opening period.

NOTES: With his first period goal, Bergeron is now tied with Ray Bourque for fourth on the Bruins' all-time goals list with 395.

St. Louis: At Buffalo on Thursday to wrap up a two-game trip.

Boston: Host Ottawa Senators in the second of a three-game homestand.