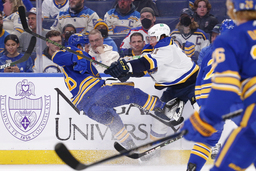 The 30-year-old scored three times as part of a career-best five-point outing, and St. Louis rolled to its seventh straight win by beating the Buffalo Sabres 6-2 on Thursday night.

Putting behind questions of whether he could regain his prolific playmaking ability after missing much of the past two seasons with a nagging shoulder injury, Tarasenko is fueling the Blues' surge up the standings.

"It's huge," coach Craig Berube said. "His work ethic and his competitiveness, he's leading by example. That's what I see."

Tarasenko broke open a game tied at 2 by scoring twice in the second period, including making a tremendous fake to turn rookie defenseman Owen Power inside out for a breakaway goal. He then added an empty-netter to cap an outing in which he topped 30 goals for the sixth time in 10 seasons.

As if that wasn't enough, the 30-year-old has scored the winning goals in each of the Blues' past three outings to give him a career-best nine on the season.

"He's playing out of his mind. We all know, Vladdy can play like that," center Robert Thomas said. "We've just got to keep going and we're going to have to rely on him a lot."

Pavel Buchnevich, Brandon Saad and David Perron also scored for the Blues, whose run has them battling the Minnesota Wild for second place in the Central Division standings, and home-ice advantage in the first round of the playoffs.

Alex Tuch and Rasmus Asplund scored, and Craig Anderson stopped 22 shots for Buffalo. Power set up Tuch's goal for the 2021 No. 1 draft pick's first NHL point in his second career game since leaving Michigan to sign with the Sabres.

Tarasenko took Power to school on each of his first two goals.

The 19-year-old was caught out of position in allowing Tarasenko to score the go-ahead goal into an open right side of the net 7:18 into the second period. And Power was caught flat-footed when Tarasenko sped past him up the right wing to score 5:27 later.

Power accepted what happened as a learning experience with Buffalo playing out its final string of games after having already been eliminated from playoff contention.

"When you play against these top players, you have to learn a lot and you obviously make a lot of mistakes where you're glad you're able to learn from it," he said. "Every game I'm going to get better and work on things. This is a step in the right direction."

Tarasenko, who has six goals and 11 points in his past four games, and leading an offensively balanced Blues team which began the day ranked fourth in the NHL in goals, and has now outscored its past seven opponents by a margin of 35-14.

"When we do things right, it's good. There's a lot of times tonight that it was just OK, too," Berube said, assessing his offense. "But it has the ability to be really good."

With a goal and two assists, Buchnevich extended his point streak to eight games, in which he has five goals and 14 points. ... Thomas' point streak was the second-longest active run entering Thursday, behind Florida's Jonathan Huberdeau (12 games). ... The Blues improved to 15-2-1 in their past 18 meetings against Buffalo.

Sabres coach Don Granato earned recognition earlier in the day by being selected as an assistant coach for the U.S. men's national team to complete at the world championships in Finland next month. Granato is in his first full season as Buffalo's coach and has previously coached USA Hockey's developmental program teams.

Blues: Host the Wild on Saturday in a showdown between the Central Division's second- and third-place teams.

Sabres: Open a home-and-away set against Philadelphia by hosting the Flyers on Saturday.