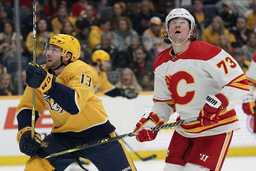 NASHVILLE, Tenn. (AP) Matt Duchene scored his 40th goal of the season and Mikael Granlund had the only goal of the shootout to lead the Nashville Predators to a 3-2 victory over the Calgary Flames on Tuesday night.

Filip Forsberg also scored and Juuse Saros made 19 saves in regulation and overtime for Nashville, winners of two of three. The Predators entered Tuesday in the Western Conference's top wild card position, tied in points with the Dallas Stars.

"I think when you come down the stretch like this, you got to play meaningful hockey," Nashville coach John Hynes said. "It's what this time of year is about. You're not going to get a lot of rest. I think it's about getting into game mode, competitive mode, recovery mode, being mentally ready for games."

Andrew Mangiapane scored twice and Dan Vladar made 25 saves in regulation and overtime for Calgary, which had its two-game winning streak snapped. The Flames inched closer to clinching the top spot in the Pacific Division with the standings point for the shootout loss.

"You want to play these last games here almost like it's playoff time.," Mangiapane said. "Playoffs are coming soon, so you want to gear up and sharpen up your game, all-around game. defensively, in the neutral zone, offensively, whatever it is, now is the time to prepare yourself."

In the shootout, Granlund slipped a wrist shot between Vladar's pads. Saros then stopped Tyler Toffoli to seal the victory for Nashville.

Forsberg scored the game's first goal at 7:23 of the second period on a Nashville power play.

From the center of the blue line, Ryan Johansen sent a pass to Forsberg in the left circle. There, he beat Vladar with a one-timer to the far side that tipped off of the post.

Duchene doubled the lead at 12:09 of the second.

Vladar stopped Duchene's initial shot, but the rebound bounced around just outside of the crease and then off of the stick of Calgary defenseman Christopher Tanev and past Vladar.

Mangiapane halved Nashville's lead at 15:13 of the second.

With Calgary on a power play, Saros stopped Johnny Gaudreau's shot from the left side, but the rebound bounced off of Matthew Tkachuk and then to the left post, where Mangiapane had a tap-in for his 33rd goal of the season.

Mangiapane struck again at 6:40 of the third, converting the rebound of a Toffoli shot, tying the game.

During a media timeout in the game's first period, the Predators played a tribute video for Flames forward Calle Jarnkrok. Jarnkrok spent the first eight seasons of his NHL career with Nashville, playing 508 career regular season games for the Predators and scoring 98 goals and adding 117 assists.

Seattle selected Jarnkrok in the expansion draft and traded him to Calgary prior to the trade deadline.

At the video's conclusion, players from both teams tapped their sticks on the ice and boards to recognize Jarnkrok, who stood and waived to the fans.

Entering this season, Duchene's previous high in goals was 31, set in 2018-19 with Ottawa and Columbus.

Forsberg's goal snapped a season-long eight-game goalless stretch. The goal was Forsberg's 39th of the season.