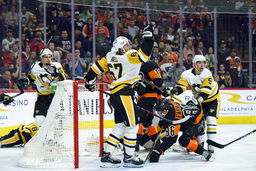 PHILADELPHIA (AP) Noah Cates had two goals and an assist, Martin Jones made 37 saves and the Philadelphia Flyers beat the Pittsburgh Penguins 4-1 on Sunday.

Morgan Frost added a goal and an assist and Travis Konecny scored an empty-netter for the Flyers, who won their second straight after losing six in a row.

"We just weren't good enough," Pittsburgh coach Mike Sullivan said. "I was hopeful that we were going to have a better effort."

"Wasn't our best," Crosby said. "It's not always going to be your best, you still have to find ways to win. We've got two games left here to make sure we're playing the right way going into the playoffs. You definitely want to be playing well, wherever that seeds you so be it."

Philadelphia is merely playing out the season. The Flyers entered with the second-worst record in the East, and several regulars are sidelined for the remainder of the season. A mix of AHL call-ups and young players looking to establish themselves in the NHL gave Philadelphia a surprising lift against the more-talented Penguins.

Cates is one of them. A fifth-round pick in 2017, Cates recorded his first multi-goal performance and now has five tallies in 13 career games. He joined the Flyers after his college team, Minnesota-Duluth, was eliminated from the NCAA tournament.

The 23-year-old Cates scored both goals in nearly identical fashion, the first a deflection of Keith Yandle's slap shot from in front of the net with 13:11 left in the second period to put Philadelphia ahead 2-0, and the second a redirection of Ivan Provorov's slap shot on the power play with 10:22 to play to make it 3-0. It was a rare tally on the man-advantage for Philadelphia, which entered last in the NHL on the power play by converting just 12 percent of its chances.

Frost scored on a rebound with 4:11 left in the first to put the Flyers on the board.

Said Jones, "A lot of these young guys are starting to feel more comfortable out there, they're getting an opportunity to play, they're taking advantage. It's great for them."

Crosby recorded his 31st of the season and team-leading 84th point with 3:33 left.

With starter Tristan Jarry sidelined with a foot injury, Louis Domingue made his second appearance of the season in goal for the Penguins. Backup Casey DeSmith has assumed the starting spot while Jarry recovers from an injury sustained on April 14. DeSmith made 23 saves in Pittsburgh's 7-2 win at Detroit on Saturday.

Domingue was solid throughout the contest and kept the Penguins from falling into a three-goal deficit with a stellar pad stop of Tippett from point-blank range with 10 minutes left in the second. He finished with 39 saves.

Jones was even better. Philadelphia's goalie was at his best late in the second, first denying Jake Guentzel with 5:09 left and then turning away Evgeni Malkin's excellent chance on the power play 27 seconds later.

Flyers: At Chicago on Monday night.