One last pass: Getzlaf wraps up career in Ducks' loss to STL 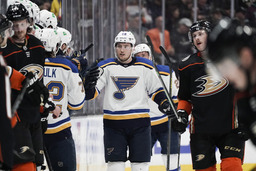 ANAHEIM, Calif. (AP) Ryan Getzlaf skated in with the puck on his stick and a clear path to goal. With an entire building practically begging him to shoot, the Anaheim Ducks' longtime captain glanced left, spun right and feathered a breathtaking, behind-the-back pass to trailing teammate Adam Henrique, who did not miss.

The final point of Getzlaf's 17 NHL seasons both epitomized and punctuated everything that made him one of the greatest playmaking centers of his era and a monumental player in California hockey.

Nearly every time when he could have gone for personal glory - whether in trying to score more goals, or in leaving the struggling Ducks for a better team late in his career - Getzlaf chose his teammates first. He refused to change his style or his address, and Anaheim returned his love yet again when he finally said farewell.

Getzlaf got his 737th career assist on that pass to Henrique with 2:41 to play, stylishly wrapping up a career spent entirely with the Ducks in a 6-3 loss to the St. Louis Blues on Sunday night.

Getzlaf finished his prolific career with 1,019 points, the 88th-most in league history - but few of those points will be more memorable than his final assist. Getzlaf broke in practically unmarked on St. Louis goalie Ville Husso, but in keeping with the pass-first philosophy that defined his career, he found a creative way for the Ducks to score.

"Absolutely not," Getzlaf said when asked if he considered a shot. "There wasn't a chance in my mind I was shooting that puck. It's funny how those things fall into your lap and happen that way. I couldn't ask for a better way to finish it."

The standing-room-only crowd at Honda Center repeatedly roared for Getzlaf from his first step on the ice to his final, teary departure. After the final whistle, he stepped under a spotlight on the center circle in the darkened arena and gave his thanks to the fans and his family while both teams looked on.

"That was more than I could have ever imagined," Getzlaf said. "I couldn't ask for more. It really hit me in the heart to see that many people show up tonight."

Jordan Kyrou, Vladimir Tarasenko, Ivan Barbashev and Justin Faulk had a goal and an assist apiece during a dominant second period by the Blues, who fell behind 2-0 in the first period before rallying for their 14th win in 16 games.

Pavel Buchnevich and Marco Scandella added third-period goals and Husso made 14 saves for St. Louis, which remained even with Minnesota for second place in the Central Division and home ice in their playoff series, although the Wild have a game in hand.

Max Comtois and Gerry Mayhew scored in the first period for the Ducks, who have lost 19 of 22 in the dismal finish to their fourth straight non-playoff season. John Gibson stopped 31 shots.

Henrique got the honor of converting Getzlaf's final assist, but it came laden with pressure.

"I was a little nervous," Henrique said. "I was thinking he's in a spot (where) he should shoot, but it's Getzy, so of course he makes a spin-o-rama pass right on the tape. I just tried to be ready for it and not think too much. It's special to be a part of that."

The 36-year-old Getzlaf is the Ducks' franchise leader in points, assists, playoff scoring and games played, and he served as the Ducks' captain for a team-record 12 seasons. An often-brilliant passer with impressive ice vision and a mean streak, he became the 92nd player in NHL history to score 1,000 points last November - and only the 45th to do it with one team.

"He's someone that I've looked up to my whole life, from a young age," Tyler Bozak, the Blues forward and Getzlaf's fellow Saskatchewan native, told Bally Sports Midwest. "A guy that I played against a bit growing up. He set the standard in Regina for being a hockey player. He was far and away the best player in the city and the province, and someone that everybody tried to be as good as. ... Pretty special night for him. It was awesome for me."

With their playoff hopes already dashed, the Ducks turned their home finale into a tribute game for Getzlaf. Thousands of fans eager for something to celebrate after a dismal half-decade in Anaheim hockey lined up outside two hours before the arena doors opened.

After a pregame tribute video, Getzlaf and his wife and four children joined team owners Henry and Susan Samueli at center ice. The Ducks presented Getzlaf with an around-the-world golf vacation, followed by an off-road vehicle driven onto the ice by beloved Ducks legend Teemu Selanne, Getzlaf's teammate on the 2007 Stanley Cup champions.

After Anaheim rode the momentum to score on its first two shots, the Blues' huge talent advantage showed in the second period. After Kyrou and Tarasenko got credit for goals on deflected shots, an unmarked Barbashev put the Blues ahead with his 26th goal from point-blank range.

Tyler Bozak returned from a six-week injury absence for St. Louis, and Robert Thomas had an assist to extend his points streak to a career-best 17 games.

Blues: At Avalanche on Tuesday.

Ducks: At Sharks on Tuesday. Getzlaf will not play in Anaheim's final two games.