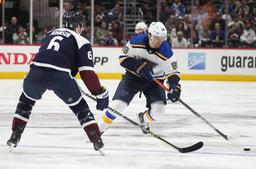 DENVER (AP) The Colorado Avalanche met Tuesday morning to figure out what was suddenly ailing one of the top teams in the league.

Team leaders had their say. Coaches, too. The message sank in - whatever that exact message may have been.

Valeri Nichushkin scored one of Colorado's three goals in the second period and the Avalanche held on late to match the franchise record for points in a season with a 5-3 win over the St. Louis Blues on Tuesday night.

Erik Johnson and Manson also scored in the second. Artturi Lehkonen added a goal just 9 seconds into the third period to make it 4-1. St. Louis rallied in the closing minutes, but Nazem Kadri ended the threat by scoring an empty-net goal with 46.2 seconds left to help Colorado end a four-game slide.

The Avalanche have amassed 118 points to tie the club mark set by the 2000-01 squad that went on to win the Stanley Cup.

Darcy Kuemper made 29 saves for Colorado, which has already wrapped up the top seed in the Western Conference.

"We had to get back to what we're doing," Manson said. "There's no panic. We just needed to keep our composure on the bench. Not get frustrated. Frustration is kind of a useless emotion."

Ryan O'Reilly scored twice and Brandon Saad added a goal for a Blues team that will face Minnesota in the first round of the playoffs, with home ice between the two still to be determined. The Wild and Blues remain tied in points.

It was the first loss in regulation this month for the Blues. They're now 12-1-2 in April.

"It wasn't our best effort tonight. We know that. I think we were a little nervous," said O'Reilly, whose team saw its seven-game road winning streak halted. "We've been playing a lot of good hockey lately."

Jordan Binnington seemed to have stick trouble all night, losing the handle on it several times. He finished with 29 saves.

O'Reilly scored twice in a 64-second span to make it 4-3 with 3:11 left. Kadri allowed the Avs to breathe easier with his 27th goal of the season.

"They were a little more desperate than us," O'Reilly said. "We just didn't respond quick enough to it."

The Avalanche have been in a slump since their nine-game winning streak was snapped. Hence, the lengthy meeting before their morning skate. The theme was to get back to their speedy, structure-oriented brand of hockey.

"I don't think there's such a thing as a perfect game," Johnson said. "What we got tonight is what we needed. It was a game that was important for us to play the right way, and we did for the majority of the game. It felt good. The guys needed that one."

Lehkonen's goal equaled the third-fastest to start a period since the franchise relocated to Denver, according to the team. The record is eight seconds by Antti Laaksonen in the first period on Feb. 20, 2006, at Columbus. That mark was matched by Mikko Rantanen in the third period on Jan. 4, 2020, at New Jersey.

Blues defenseman Marco Scandella made the save of the opening period with Binnington off the ice for an extra skater on a delayed penalty call. The puck glanced off the skate of a St. Louis player in the offensive end and slid down the ice toward the net.

Skating hard, Scandella dove to keep the puck from going in. He crashed into the net and then the boards before slowly skating toward the bench.

In the third, Scandella favored his right leg as he skated off the ice.

Goals by Johnson and Manson, along with an assist from Samuel Girard, gave Colorado's defensemen 235 points this season. It's the most by a defense since Detroit had 240 in 1995-96.

Rantanen skated Tuesday morning. He's missed the last four games with a non-COVID-19 illness. "He's starting to get his energy back now," Avalanche coach Jared Bednar said. ... Colorado captain Gabriel Landeskog (knee surgery) is unlikely to return for the regular season, Bednar said, but could be ready for the playoffs. ... Blues LW David Perron was a late scratch with a lower-body injury ... F Brayden Schenn missed a third straight game.

Avalanche: Host Nashville on Thursday before winding up the regular season Friday at Minnesota.