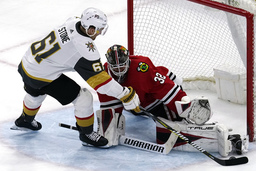 CHICAGO (AP) Tyler Johnson scored in the seventh round of the shootout, and the Chicago Blackhawks beat Vegas 4-3 on Wednesday night, eliminating the Golden Knights from the playoff race.

Johnson scored on a wrist shot seconds before Dallas, which needed a point to eliminate Vegas regardless, went into overtime at home against Arizona. Johnson's goal was the only one in 14 attempts in the tiebreaker.

"I don't know how to explain that," Vegas coach Pete DeBoer said of the seven failed attempts by the Golden Knights, who lost their third straight game via a shootout. "I'm at the front of the line for responsibility. ... There's a lot of expectations on this team."

"We kinda tried to play spoiler," Jones said. "We wanted to beat those guys and send them home, too. So it was fun to get the win. It's nice to spoil their party."

"Decisions are out of our control," Pacioretty said of the offseason, which starts for Vegas before the playoffs for the first time. "We believe in what we have on this team. We made two runs the last two years and one before I came here. There's still no excuse for the position we're in right now."

The Golden Knights came back from three one-goal deficits in the first two periods.

"Motivation tonight was obviously an issue even though we were mathematically alive," DeBoer said. "At different points, you see the scoreboard. But there was an emotional letdown after a tough, hard game in Dallas last night that we could have won."

Stephenson was hopeful until the end.

"We wanted to give ourselves a chance," Stephenson said. "Crazier things have happened. We just came up short."

"I know the other coaches," Chicago interim coach Derek King said. "I feel for them, but our job is to win hockey games. So I'm glad we did."

Pacioretty's mid-air deflection of Brayden McNabb's snap shot tied the game at 3-all with 2:48 left in the second. That erased the Chicago lead created by defenseman Jones on a 30-foot shot 5:03 into the third.

Raddysh scored the Blackhawks' first two goals, giving him 11 for the season. He opened the scoring by banking the puck off Thompson's backside 16:01 into the first period. Vegas tied it 1:38 later on Amadio's deep-angle wrist shot from the left side.

Raddysh put the Blackhawks up 2-1 with a second left in the first period, a lead that lasted until 3:57 of the second, when Martinez snapped a puck past Lankinen's outstretched glove hand.

Thompson made a big save on Alex DeBrincat with 1:42 left in regulation time, stopping the forward from 20 feet to help force overtime.

Thompson batted away Patrick Kane's close-in chance 42 seconds into overtime, after which Lankinen stopped Jack Eichel's drive from about 20 feet to keep the game tied.

NOTES: Thompson was in goal for Vegas for the fourth straight game with Robin Lehner sidelined after shoulder surgery. ... Chicago D Calvin de Haan and D Erik Gustafsson were healthy scratches. ... The Blackhawks' 14 home wins are the fewest in a full 41-game home season since 2003-04, when they went 13-17-6-5 at United Center. ... With one game remaining, no Blackhawks defensemen has scored a power-play goal this season. Only three power-play goals came from the Chicago blueliners last season.

Golden Knights: At St. Louis on Friday night to close the season.

Blackhawks: At Buffalo on Friday night in the season-finale.