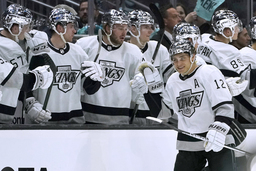 SEATTLE (AP) Lias Andersson's first goal of the season for Los Angeles snapped a tie early in the third period and the Kings beat the Seattle Kraken 5-3 Wednesday night.

With a playoff spot and their first-round pairing against Edmonton already clinched, the Kings rested a handful of their regulars on Wednesday. Among them were team points leader Anze Kopitar (66 on 19 goals and 47 assists), and leading goal scorer Adrian Kempe (34).

"We had a lot of guys stepping into the lineup or maybe it was their first game back in a couple weeks," Vilardi said. "They came out better than us in the first period - we weren't very hard to play against. But Quickie made some big saves because that's what he does, and it gave us a chance to come back."

Jared McCann, Ryan Donarto, and Jordan Eberle scored for the Kraken, who lost their third in a row. Philipp Grubauer finished with 21 saves.

On the go-ahead goal, Brendan Lemieux picked up a loose puck behind the Seattle net, and sent it out in front to Andersson, who was rushing toward the net and sent it past Grubauer to give the Kings a 4-3 lead at 2:39 of the third.

Seattle had a power play for 4 minutes, 43 seconds late in the third period, including 1:18 of a 5-on-3 advantage. But the closest it could come to the equalizer was a shot by Daniel Sprong that hit the left post.

Athanasiou had an empty-netter with 1:06 left to seal the win.

Los Angeles tied it with two goals just 3 1/2 minutes apart. Vilardi made it 2-1 at the 10:11 mark, ripping a shot past Grubauer from the upper part of the left circle, his fourth. Then at 13:41, Danault tallied his 27th.

"I don't think we should have put ourselves in that situation" Kings coach Todd McLellan said of the two-goal hole. "I don't think we played with any purpose in that first period. It was like we played because the game was scheduled, and that was really it. We had a lot to talk about (between periods). After that, I thought we began to play with some purpose.

"They totally responded, and I would have been disappointed if they hadn't," McLellan added. "That was expected of them. They've done that for seven months now."

The Kraken needed just 48 seconds to go back in front when Eberle stickhandled his way to directly in front of Quick and slapped it past him for his 21st.

NOTES: Wednesday was the third time in the last four games that the Kraken built a 2-0 lead, only to wind up losing. The first two were 6-3 at Minnesota last Friday and 3-2 at Dallas last Saturday. . The Kings won the season series, 3-1. ... With the assist on Jordan Eberle's second-period goal, Matty Beniers now has a point in seven of his first eight NHL games.