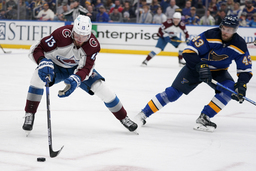 ST. LOUIS (AP) Despite regaining the edge in their second-round series, the Colorado Avalanche aren't satisfied.

Artturi Lehkonen scored twice, Darcy Kuemper stopped 29 shots and the Avalanche beat the St. Louis Blues 5-2 in Game 3 on Saturday night to take a 2-1 lead in the best-of-seven series.

Logan O'Connor, Nazem Kadri and Gabriel Landeskog also scored as the Avalanche bounced back from a 4-1 loss at home two nights earlier, and improved to 3-0 on the road in the postseason.

"Of course it was a good answer from the last game," Lehkonen said. "We still know that we can clean up some stuff in our game and we've got to move on to the next one."

Ryan O'Reilly had a goal and an assist, and Colton Parayko also scored for the Blues, who might've lost starting goalie Jordan Binnington.

Binnington made three saves before leaving the game 6:45 into the first period after Kadri and Blues defenseman Calle Rosen collided into him after getting their skates tangled up in the crease. No penalty was called on the play.

The coach added that Binnington was being evaluated for a lower body injury.

"I just see a loose puck, really" Kadri said. "I was just kind of sitting behind him and just tried to poke it with my stick. I think their defenseman kind of collided with me and pushed me into him. Had that not been the case, I don't think I would have hit him at all."

After the game, while Kadri was being interviewed on television, he said a Blues player threw a water bottle at him and believed it was Binnington.

"I think there was a little bit of a momentum swing there," O'Connor said about the Blues changing goaltenders. "I think even before that we felt our game coming a little more. We weathered it early. They were hard on us to begin with, really closing down in the defensive zone. Then we started rolling things over a little more, getting a little more confidence with the puck."

Parayko scored his second goal of the postseason on a slap shot from the point 3:55 into the game to put St. Louis ahead 1-0.

O'Connor got his first at 11:54 to tie it, and Kadri followed with his second of the postseason when he deflected Cale Makar's slap shot past Husso right after Pavel Buchnevich finished serving an interference penalty.

Lehkonen scored his third of the playoffs to put Colorado up 3-1 with 2:45 remaining in the second period. Nathan MacKinnon assisted on the goal to give him points in seven straight postseason games.

O'Reilly tapped in a rebound from Nick Leddy for his seventh goal of the postseason to pull St. Louis within one with 29 seconds remaining in the middle period.

"I think we were kind of a little more hoping for a play," O'Reilly said about the third period. "We kind of lost our structure a bit and kind of having our numbers where we need them in order to generate some offense. It wasn't the best push by us."

Landeskog iced the game when he scored his fifth of the postseason with 2:08 remaining after Husso had started to skate off the ice for an extra attacker.

Lehkonen scored his second of the night with Husso pulled to put Colorado up 5-2 in the final minute.

Avalanche defenseman Samuel Girard had to be helped off the ice after his head crashed into the boards on a check from Ivan Barbashev 1:40 into the first period. After the game, Bednar said Girard has a broken sternum and will be out for the remainder of the postseason.

"I thought it was a legal check to be honest with you," Bednar said. "It kind of goes in on his head side, but he got a lot of body there. He just turned the right way and went in awkward. It was a heavy check. Unfortunate."

O'Reilly has at least one point in seven consecutive games. He has scored seven goals and four assists during his streak

Berube coached his 48th playoff game with the franchise moving him past Ken Hitchcock into third place in team history.

Former Blues defenseman and hockey hall of famer Chris Pronger was shown on the video board at Enterprise Center. Pronger, whose number 44 was retired by the club earlier this season, chugged a beer to the crowd's delight, reenacting a scene from his jersey retirement ceremony.