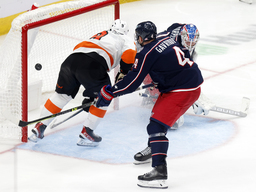 Zach Werenski and Nick Blankenberg also scored for the Blue Jackets, and Joonas Korpisalo stopped 32 shots for his first win since offseason surgery.

Ivan Provorov had a goal and an assist, and Tony DeAngelo also scored for the Flyers. Carter Hart stopped 24 shots after missing a game to illness.

Gaudreau put Columbus up at 3:53 of the first, shooting a feed from Werenski past Hart for his team-leading sixth goal of the season and Columbus' first lead in six games.

The two paired up again when Werenski buried a deflected shot by Gaudreau to put Columbus up 2-0 at 12:03.

"You score early and you start feeling good about your game," Blue Jackets coach Brad Larsen said. "You're not chasing it. I thought the guys battled hard.

"Korpi was outstanding. He made some big saves when we needed it. It was a great team effort."

Jenner made it 3-0 37 seconds into the second period, roofing a feed from Patrik Laine.

"Ultimately, I thought we did a great job protecting the lead and being smart with the puck," Gaudreau said. "It's a big win for us."

The Flyers got on the board at 13:04 of the second after a scramble in front of the net left the puck loose behind Korpisalo and DeAngelo bumped it in.

Philadelphia pulled within one when Provorov buried Travis Konecny's feed in front of Korpisalo at 8:41, but late empty-netters from Blankenburg and Jenner sealed it for Columbus.

"I thought our checking was pretty good," said assistant coach Brad Shaw, who addressed the media in place of Flyers coach John Tortorella. "I thought that we mismanaged the puck a few times, and they took advantage, and we paid the price.

The Blue Jackets played with just four defensemen after Werenski suffered an upper-body injury late in the first period and did not return. Erik Gudbranson left the ice with a facial laceration after a hard check into the boards in the second period and also did not return.

"The guys were battling out there like crazy, especially dropping down to four defenseman," Jorpisalo said. "Just seeing how they battled there - they put 110 percent out there. You want to do the same."

The game marked the return to Columbus of Tortorella, the winningest coach in Blue Jackets history. He guided the team to a 227-166-54 record from 2015-21, including four straight playoff appearances from 2016-20. Despite receiving a standing ovation from the Columbus fans during a welcome-back video, Tortorella declined to speak with the media after the game.

The Columbus power play continued to struggle. The team went 0-3 and is yet to score with a man advantage in North America. The Blue Jackets are now 2-for-36, and both goals came during its two-game series with the Colorado Avalanche in Finland - both losses.

Sean Kuraly took an elbow to the head in the Blue Jackets' second game against Colorado in Finland. He has yet to return to practice. Jakub Voracek is out indefinitely after missing the team's second game in Finland with an upper-body injury. Kent Johnson was also out for precautionary reasons. Former Blue Jacket Cam Atkinson, traded to Philadelphia in 2021 for Voracek, took part in the morning skate but has yet to play in a game after suffering an injury in training camp.

The Blue Jackets recalled forwards Brendan Gaunce and Emil Bemstrom from the Cleveland Monsters and both made their season debuts. The Flyers recalled Egor Zamula from the Phantoms.

Before leaving the game with an injury at the end of the first period, Werenski extended his assist streak to three games. He has four points in the team's last three games. The Blue Jackets are 3-0-0 when Werenski scores.

This was the fourth time in Gaudreau's career he's had a three-point game against the Flyers. He is the first Blue Jacket this season to record three points in a game.