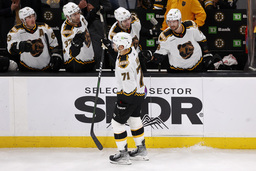 BOSTON (AP) David Pastrnak scored two goals as the Boston Bruins tied the NHL record for most consecutive home wins to open a season with 11 by beating the Chicago Blackhawks 6-1 on Saturday night.

It was the sixth straight victory for the Bruins (16-2-0). Boston hits the road for two games this week - against Tampa Bay and Florida - before returning home to host Carolina for its annual Black Friday matinee.

"It's unfathomable that we were going to have this start," Boston's first-year coach Jim Montgomery said. "So we're enjoying the ride right now, but we know our schedule is getting really hard. It's nice to be part of the record books."

Behind a fired-up TD Garden crowd that broke into numerous chants of "Let's Go Bruins," Boston jumped to a 2-0 edge early in the second period en route to matching its season-high for goals in a game.

"You can see how close everyone is in this room, how everyone plays for each other," McAvoy said. "We're pulling from experiences we've had so far. ... It's a great attitude and vibe in the room right now. We've just got to ride these waves."

Playing his first game since leaving with a left knee injury from a collision with Bergeron, Bruins goalie Jeremy Swayman made 17 saves.

"It's been great," Bergeron said. "We're trying to focus on what brings success right now, and be in the moment."

"I don't think anyone is lacking a lot of confidence, but when goals start going in maybe guys are not making as much of confident plays," Chicago defenseman Connor Murphy said.

With Boston on the power play, Pastrnak took a cross-ice from Brad Marchand just inside the right circle and slipped a wrister that slipped under the pads of Mrazek 4:53 into the game.

The Bruins led 1-0 after one period and it could have been a lot more because they outshot Chicago 15-3 and had a handful of excellent close chances.

Bergeron one-timed McAvoy's pass inside the left post, making it 2-0 at 4:28 of the second.

Raddysh, positioned in the slot, tipped Max Domi's shot into the net for a power-play score that sliced it to 2-1

But DeBrusk and Krejci scored a little over a minute apart late in the second, making it 4-1. Pastrnak's second came midway into the third.

"Credit to them, they play fast and they capitalize on those chances," Blackhawks defenseman Jarred Tinordi said. "We didn't take care of the puck tonight and it hurt us."

HOW THE WEST WAS WON

The Bruins improved to 8-0 against Western Conference teams.

Bergeron needs one point for 1,000 in his career. He'd become the fourth Bruins player all-time to reach that mark. ... Chicago forward Patrick Kane turned 34 on Saturday. . The Blackhawks had killed off all their penalties in the previous four games before Boston scored on its first power play. . Both teams wore reverse retro jerseys. . Mrazek played his 301st career game.