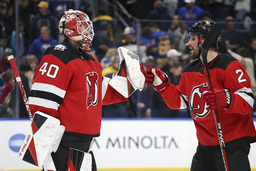 Metropolitan Division-leading New Jersey bounced back from Wednesday night's 2-1 loss at home against Toronto that ended a franchise record-tying run of 13 victories.

"We talked about not losing two games in a row," Devils coach Lindy Ruff said. "And I thought overall we got a really good team effort."

The Devils' road win streak matches the second-longest in team history, and their 11-1-0 record in November marks the most wins they've ever had in the month.

"We had great jump," said Erik Haula, who had an assist on the Devils' first goal after creating the scoring chance with poke check in the defensive zone. "Great O-zone pressure. We were able to get on pucks, create some turnovers. We gave up a couple chances, but I thought we had great energy."

New Jersey backup goalie Akira Schmid made 31 saves and improved to 4-0-0 this season. The 22-year-old from Switzerland lost in each of his four starts as a rookie last season.

The Devils' defense slowed a Sabres attack that had 13 goals in consecutive victories following an eight-game skid.

"They got a lot of swagger right now," Sabres coach Don Granato said. "Their defense, I thought, was pretty dominant, pretty early."

New Jersey got three goals in the second and has outscored opponents 30-20 in the period through 21 games.

Dawson Mercer's backhand pass set up Hughes for a sliding one-timer two minutes into the second.

About four minutes later, Yegor Sharangovich extended his point streak to five games when he took the puck from Buffalo's Mattias Samuelsson along the end boards and fed Boqvist in the slot.

After Olofsson scored on a rush to make it 2-1, Tatar answered for the Devils with a shot from the left circle that slipped between Anderson's pads with 2:05 remaining in the second.

Captain Kyle Okposo returned to the Sabres' lineup after missing six games with a lower-body injury. "Just some wear and tear I've been dealing with and had to give it some time to calm down," the 34-year-old forward said.

Buffalo defenseman Jacob Bryson is out for at least a week with a lower-body injury sustained in Wednesday's 6-2 win against St. Louis. Casey Fitzgerald, a healthy scratch in five of the past eight games, replaced Bryson in the lineup. He is the son of New Jersey general manager Tom Fitzgerald.

Devils coach Lindy Ruff is one victory from becoming the fifth NHL coach with 800 in his career. Ruff, a former Sabres player, won 571 games coaching Buffalo from 1997-2011. He got 165 wins in five seasons coaching Dallas, and Friday's victory was his 63rd in two-plus seasons with New Jersey.