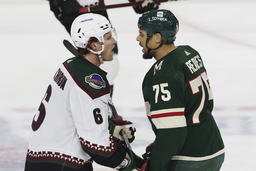 ST. PAUL, Minn. (AP) Kirill Kaprizov had a goal and two assists to establish a career-high nine-game point streak and the Minnesota Wild held off the Arizona Coyotes 4-3 Sunday.

Nick Schmaltz scored in his third straight game, and Lawson Crouse and J.J. Moser added late goals for Arizona, playing the 10th game of a 14-game trip. The Coyotes failed to earn a point for the first time in four games.

Kaprizov has five goals and nine assists in his current scoring streak.

"Come to the rink prepared every single game, just play the way I know how to, not really think about a certain streak or to do anything special. Just play my game and let the rest of it kind of take care of itself," he said through an interpreter.

"He's a superstar. He's one of the best players in the league for a reason. He's our best player. He controls everything for us," Boldy said. "Obviously it's nice to see him have that success, but I think a lot of it comes with a lot of hard work. It's not easy points. ... He's burying rebounds and winning battles on walls and making good plays."

Added Marcus Foligno: "You hear about guys with a lot of skill, but he's got a work ethic of a fourth liner and the attitude of a captain."

Clayton Keller had his 14th assist of the season for Arizona. His 21 points is the most by a Coyote through the first 20 games played in a season since Ladislav Nagy had 21 in 2003-04.

Keller has a league-best 18 points in 16 road games, one more than Edmonton's Connor McDavid and Pittsburgh's Sidney Crosby. However, McDavid has played just 10 road games and Crosby 14.

Connor Ingram had 24 saves for the Coyotes, who got goals from Crouse and Moser 90 seconds apart late in the third period to make it 4-3.

"I think the game was fair. I think we didn't play better than them. We came up short by one goal," Arizona coach Andre Tourigny said.

Minnesota dressed 11 forwards and played most of the second period with only 10.

Foligno fought Liam O'Brien at 1:44, but the rugged Wild forward threw his equipment in the penalty box while continuing to yell at an official. In addition to a roughing minor and fighting major, he received 2 minutes for unsportsmanlike conduct and a 10-minute misconduct.

Foligno said O'Brien told him he "snowed the goalie." He then pushed O'Brien out of the way when he put his shoulder into Foligno's chest.

"I felt a little bit disrespected there," Foligno said. "I don't know how you give a guy an extra 2 for something that there's really nothing there. It's just a 5-minute fighting penalty, give two guys each 5 minutes and move on. Sometimes these referees try to be bigger than the game."

Arizona LW Matias Maccelli had two assists after being scratched the past two games. His 12 assists lead all rookies, and his 13 points are second behind the 15 by Seattle's Matty Beniers.

Coyotes: Game 11 of a 14-game road trip is Thursday in Los Angeles.

Wild: Home against Edmonton on Thursday.