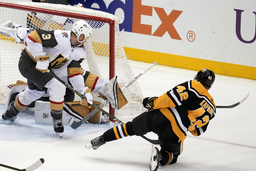 PITTSBURGH (AP) The Pittsburgh Penguins have no idea how long they'll have to play without Kris Letang. They may have landed on a formula on how to get by without their star defenseman while he recovers from a stroke during a 4-3 comeback victory over Vegas on Thursday night.

Shoot the puck. All the time. From anywhere on the ice.

Jake Guentzel and Kasperi Kapanen scored less than two minutes apart in the third period as the Penguins rallied past the Pacific Division-leading Golden Knights to win for the first time since Letang's stunning diagnosis.

While Letang skated at the team's practice facility on Thursday morning just three days after suffering his second stroke, there's no timetable for his possible return. Letang's teammates picked up the slack against Vegas, peppering Golden Knights rookie goaltender Logan Thompson with 47 shots, four of which found their way by him as Pittsburgh snapped a two-game skid.

"I think (we) just tried to pull together and get a win for (Letang)," Penguins captain Sidney Crosby said.

Guentzel's power-play goal 7:33 into the third tied the game at 3, and Kapanen's first goal in nearly two months 112 seconds later put the Penguins in front for the first time. Tristan Jarry finished off a 34-save performance by weathering a late flurry to win for the fifth time in his last six starts.

Brock McGinn and Rikard Rakell also scored for Pittsburgh, which handed the Golden Knights just their second road loss in regulation this season.

"I thought the guys competed really hard all night," Penguins coach Mike Sullivan said. "They didn't get discouraged when they got down a couple of goals early in the game. They just kept playing."

Vegas defenseman Shea Theodore's long shot from the point that made its way through a sea of bodies in front 1:26 into the third broke a 2-2 tie, but the Penguins kept the pressure on Thompson until the rookie finally gave way.

Guentzel ended an 0-for-17 drought by Pittsburgh's power play by firing a shot from the right circle through a well-placed Crosby screen and into the net to even the score. Kapanen, who has floated in and out of the lineup due to his inconsistent play, scored his first goal since Oct. 13 shortly thereafter when he collected a pass from behind the net by Brock McGinn and powered it by Thompson.

"I think there isn't a guy in the league that wants to be healthy (and not play)," Kapanen said. "I always want to compete with the guys. I want to be battling out there."

Thompson, the NHL's Rookie of the Month in November, lost for just the third time in 13 starts. Jack Eichel scored his 12th goal of the season for Vegas. Reilly Smith added his 10th.

"They were quicker than us tonight," Smith said. "It's a little bit of a wakeup call. We've got to do a better job just upping the tempo, especially when you play a team like Pittsburgh."

The Golden Knights have used Thompson's precocious play, a resurgent Eichel and the NHL's best road record to the top of the Pacific Division and counterpunched effectively early despite being outplayed for lengthy stretches.

Vegas wasted little time sprinting to the lead, taking a 2-0 advantage in the first period despite being outplayed for lengthy stretches. The Golden Knights counterpunched effectively, with Eichel pounding home a goal from in front 3:59 into the game. Smith then ended Pittsburgh's streak of 19 consecutive penalty kills with a snipe from in close 17:59 into the first.

It didn't last. Pittsburgh's tempo paid off with a pair of goals in the second before a late surge gave them some welcome momentum as they try to plot a way forward - at least in the short term - without one of their franchise cornerstones.