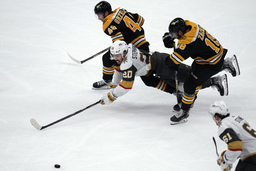 BOSTON (AP) The Vegas Golden Knights made former Boston coach Bruce Cassidy's return a success on Reilly Smith's score in the fifth round of the shootout, beating the Bruins 4-3 to end their NHL-record for home victories to open a season at 14 games on Monday night.

The 57-year-old Cassidy was fired by Boston following 5 1/2 seasons in June after the Bruins were eliminated by Carolina in the opening round of the playoffs.

Eight days after he was let go, he was hired by Vegas.

In a matchup of two of the league's top three teams, Western conference-leading Vegas opened a 3-0 lead early in the second period on two goals by Paul Cotter and the other by Jonathan Marchessault before the Bruins started their comeback when Brad Marchand and David Pastrnak scored just over six minutes apart late in the period.

They tied it on Taylor Hall's power-play goal 3:08 into the third when he spun in front and slipped a shot from the slot past goalie Logan Thompson.

Smith had the only score in the shootout, slipping a forehand shot past goalie Jeremy Swayman.

Cassidy took over as Boston's interim coach on Feb. 7, 2016, before getting the head job that April. His teams made the playoffs all six seasons, including a trip to the 2019 Stanley Cup Final when they lost the seventh game at home against St. Louis.

Cassidy knows what it sounds like in TD Garden with The Standells' song "Dirty Water" blaring after Bruins' wins.

"Now that you brought it up, I'm used to hearing "Dirty Water" at the end of the game," he said, smiling. "I'm glad I didn't hear it tonight. The streak is irrelevant to me. It's nice to come in and play well."

Boston lost for just the second time in 12 games.

"This locker room sticks together, and we knew we were going to do something special tonight," Swayman said. "It (stinks) losing, but we're going to make sure we fix the problems."

The Bruins' home-opening streak broke the record of 11 that was set by the 1963-64 Chicago Blackhawks and equaled by the Florida Panthers last season.

Before the shootout, Thompson made 40 saves. Boston's backup Swayman had 21.

"This city meant a lot to him, and he was fired up ready to go," Thompson said of Cassidy. "We went out there and tried to get him two points tonight."

Cotter collected William Karlsson's pass inside the left circle and unloaded a wrister under the crossbar 1:36 into the game.

Marchessault stole Pastrnak's attempted clearing pass, broke in alone and tucked in his own rebound to make it 2-0.

Cotter's second came 51 seconds into the second period when he slipped a wrister past Swayman's glove.

"We couldn't get it done early, before the shootout. We had chances," Pastrnak said. "It's a tough one to swallow."

The Bruins played a video montage of Cassidy on the Jumbotron late in the opening period that ended with a picture of him and said: "Welcome back, Bruce."

The crowd gave him a nice ovation and he waved thanking them.

"It's a really nice gesture by the Bruins' organization," he said. "I appreciate it. I said all along that I have a tremendous amount of respect for them. I'm thankful they did it."

The Bruins entered the game ranked second in the league both with their power play (29.6%) and penalty killing (84.1%).

Bruins: At the Colorado Avalanche on Wednesday.