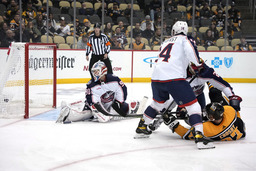 PITTSBURGH (AP) A month ago, the Pittsburgh Penguins were a mess. Disorganized on special teams. Iffy in goal. Erratic in general.

Now, not so much.

The return of center Teddy Blueger has stabilized the penalty kill. Tristan Jarry is stopping nearly everything that heads his way and Sidney Crosby, even at age 35, is playing at a level few in the NHL can match.

Crosby scored twice in two very different ways in a 4-1 victory over Columbus on Tuesday night, chipping a puck into the net while being shoved to the ice to give the Penguins the lead in the second period, then planting himself at the right post and essentially having a puck deflect off him into the net as Pittsburgh improved to 8-1-1 its last 10 games.

Crosby now has 15 goals through 26 games and is on pace for 47, the most since he poured in 44 while winning his second Maurice Richard Trophy in 2017.

"I mean it's tough for a defender," Penguins defenseman Brian Dumoulin said of Crosby. "(He's) in front of the net on his first goal, that guy is doing all he can on him and he still gets a piece of it and puts it up over the goalie. It's just impressive how good he is in all aspects of his game and it's fun to watch."

Crosby is hardly doing it by himself. Bryan Rust scored for a second straight game and Blueger scored for the first time since last March as the Penguins beat Columbus for the 12th straight time at PPG Paints Arena.

Jarry gave up a goal to Johnny Gaudreau a minute into the game but settled down quickly. Jarry finished with 38 saves to improve to 5-0 in his career against Columbus.

Gaudreau's ninth goal gave the Blue Jackets a boost early, but the Penguins snapped to over the final two periods to overwhelm Merzlikins, who stopped 30 shots in his first start since Nov. 4 but still fell to 0-5 in his career when facing Pittsburgh.

The Penguins have won three straight, all without star defenseman Kris Letang, who remains out after suffering a stroke on Nov. 28. Letang skated by himself on Tuesday morning, but there remains no timetable for a possible return.

Pittsburgh is 8-1-1 in its last 10 games and is 10-2-2 since a seven-game losing streak in late October and early November sent the club briefly tumbling down the standings.

While Pittsburgh is surging, the Blue Jackets are sliding. Columbus has dropped five of six thanks mostly to an offense that is struggling to find the back of the net. The Blue Jackets have scored more than two goals or less in each of the losses.

Gaudreau's sharp wrist shot from the left circle 60 seconds in seemed to surprise Jarry. It did little, however, to wake up his teammates. Columbus controlled play for most of the first period.

It did not take long for the Penguins to reassert themselves in the second. Rust, who went to the locker room late in the first period with an undisclosed issue, returned to jam home a rebound 1:15 into the second for his second goal in as many games after managing just one in his previous 14. And just like that, the Blue Jackets' early momentum was gone.

"Even if you lead a team like this, (with) two periods left, doesn't matter what the score is," Columbus center Sean Kuraly said. "They're in the game. These games, you just have to learn from it. The good teams are never done."

Penguins: Begin a home-and-home set with Buffalo on Friday when they visit the Sabres.