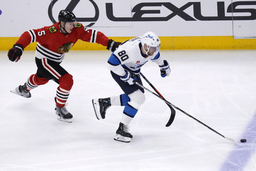 Cole Perfetti and Adam Lowry also scored and defenseman Josh Morrissey had two assists to help the Jets win for the seventh time in eight games to move back into first place in the Central Division ahead of idle Dallas.

Morrissey regained the team scoring lead with 30 points as the Jets outskated the Blackhawks to a majority of loose pucks, contributing to their 32-23 advantage in shots.

"To put up the numbers he's putting up is pretty impressive," Perfetti said. "He makes it pretty easy out here.

"We played our game and it worked," Perfetti added. "Playing the right way, we can't be trading chances. What we did tonight worked to our advantage."

"We just seemed not engaged in the first period, and if you do that, you're going to be behind the 8-ball," Chicago coach Luke Richardson said.

Perfetti took Morrissey's feed and beat Soderblom from the slot after dancing past defenseman Ian Mitchell with 4:39 left in the first. It was Perfetti's sixth of the season.

"We really liked our first period," Winnipeg assistant coach Scott Arniel said, speaking instead of head coach Rick Bowness. "We didn't spend a lot of time in our end."

Early in the second period, Morrissey set up Wheeler, who slapped a puck between Soderblom's legs for a 2-0 lead at 56 seconds. It was Wheeler's ninth.

Raddysh scored his eighth to get the Blackhawks on the scoreboard with just under 9 minutes left in the second with a wrist shot Rittich couldn't handle. It ended Chicago's scoring drought of 169 minutes, 50 seconds.

Lowry capped the scoring with his sixth with 7:35 left in the third.

"We were able to create some good chances and lock it down," Lowry said.

The Jets played the last 50 minutes without defenseman Logan Stanley, who fell awkwardly into the boards in the first period. He will be evaluated Saturday.

Chicago D Jarred Tinordi came off the injured reserve list an hour before the game, playing a limited number of shifts in the early going after taking a skate blade to the face, but eventually seeing penalty-killing duty. Tinordi had missed the previous five games with a hip injury.