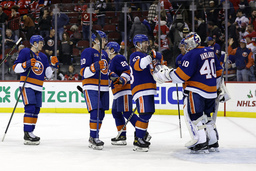 Anders Lee, Casey Cizikas and Oliver Wahlstrom also scored, and Mathew Barzal and Alexander Romanov each had two assists as New York improved to 8-2-0 in their last 10 trips to Prudential Center. Semyon Varlamov made 25 saves.

"It was a good hockey game. It's a team that's been playing well all year and we're trying to catch them,? said Islanders forward Zach Parise. "There's a lot on the line. We had a good little outburst in the second period."

Jack Hughes had a goal and an assist, and Nico Hischier, Tomas Tatar and Dawson Mercer also scored for the Devils. Dougie Hamilton, Jesper Bratt and Jonas Siegenthaler each had two assists.

Vitek Vanecek started and gave up four goals on 17 shots before he was pulled early in the second period. Akira Schmid came on and finished with 13 saves the rest of the way.

"It is tough to win every night and if you don't take care of the puck and your details aren't good ... you'll lose,? Devils coach Lindy Ruff said. "Our goalies have given us such good nights. Our puck play caught up to us."

The Devils took the early lead when Hischier scored his 12th on the power play 5:32 into the game.

Nelson scored from the right side off a pass from Romanov to tied it with 4:23 left, giving him a point in seven straight games.

"We kind of felt like we wanted to come out and play a strong game," Nelson said. "It's a big win."

Vanecek made a sprawling glove save on Nelson with two minutes left in the first before Lee put New York ahead 2-1 with 9 seconds left in the period. It was his ninth.

Romanov also leveled Devils forward Miles Wood with a body check at 12:05 of the second, sparking a melee in near the Islanders net. Romanov was challenged to a fight by Devils forward Michael McLeod.

"I can't just let him skate through the four guys and score," Romanov said. "I never chase some guys, never tried to destroy somebody. Just a clean hit, solid."

Cizikas got his first of the season at 3:31 of the second and Wahlstrom scored his seventh 34 seconds later to make it 4-1 and end Vanecek's night. It was the sixth time this season - and fourth in the last six games - the Islanders scored two less than a minute apart.

"I like the way we played," Islanders coach Lane Lambert said. "I like the fact that we stayed connected as a group. And 5-on-5 did a good job. It was a very encouraging performance."

Mercer pulled the Devils to 4-2 at 6:03 with his seventh of the season before Nelson scored again on the power play with 3:13 remaining for his 14th.

"I think we lacked a little bit of discipline," Hischier said. "I liked the effort at the end, but if you gave up six goals it's hard to win."

Clutterbuck made it 6-2 with his third goal of the campaign 1 minute into the third.

Tatar got his seventh at 2:30 with Bratt getting his team-leading 20th assist on the play.

New Jersey pulled Schmid for an extra skater with more than seven minutes left and Hughes scored his team-leading 14th at with 6:21 remaining to make it 6-4. That was as close as the Devils got.

The Devils wore their Reverse Retro white sweaters for the first time at home. The jerseys feature the color schemes of the Kansas City Scouts and Colorado Rockies, the franchise's previous two homes before moving to New Jersey for the 1982-83 season.

Devils: At the New York Rangers on Monday night.