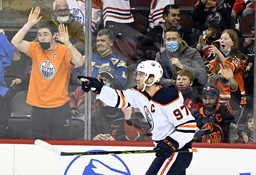 Edmonton captain and reigning league MVP Connor McDavid went on the NHL's COVID-19 protocol list Wednesday, while the Dallas Stars and their captain Jamie Benn prepared to return to the ice after missing six games over 2 1/2 weeks because of virus issues.

Maple Leafs star Auston Matthews was cleared for that game after a second false positive scare in recent weeks.

Dallas was getting ready to play for the first time in 17 days after Benn and 10 other Dallas players went through COVID-19 protocols since their last game Dec. 20. The Stars got them all back before a home game Thursday night against Florida.

The 29 games for the Stars match Colorado for the fewest played among Western Conference teams, though the Avalanche's 40 points are eight more than Dallas. Vegas and Anaheim, the top two teams in the Pacific Division, have both played 36 games.

"We've got some tough challenges ahead of us, there's no question," Stars coach Rick Bowness said Wednesday. "We're seven games behind Anaheim and Vegas. That's unreal, but 17 days between games is going to do that to you. ... It's nice to sit there and see how we've got those games in hand, but now we're forced to win them just to get back up in the pack."

Dallas won its last two games before its pause that extended well past the NHL's overall shutdown. Before those games, the Stars had a five-game losing streak that followed a season-best seven wins in a row.

While Stars players continued to practice during their pause, they didn't have a full-squad session until a scrimmage Tuesday. They practiced again Wednesday, and don't plan to try to over-complicate things when they play their first game since before Christmas.

"Little details are what's going to be really important coming out of this long break," Stars forward Jason Robertson said. "The teams that do well keep it very simple because they're just getting to play hard, but play smart. ... Then you get your legs back and get your touches in there and then things start to open up."

The Oilers held McDavid and Ryan out of practice Tuesday after they returned positive tests. McDavid had tested negative on Monday before playing in Edmonton's 4-1 loss against the Rangers in New York.

The team also announced forward Zack Kassian cleared COVID-19 protocols and goaltender Ilya Konovalov had been loaned to the team's taxi squad, with goaltender Mike Smith set to return from an undisclosed injury to start.

Matthews told reporters he planned on playing in Wednesday's game after participating in practice. Matthews had been held out of Toronto's previous two practices for precautionary reasons after testing positive for COVID-19 on a rapid antigen test on Monday, then negative on a PCR test Tuesday.

The Ontario Hockey League announced that seven more games had been postponed due to COVID-19 protocol.

The OHL has postponed 49 games this season due to COVID-19 concerns, though the league announced Wednesday that 20 of those have been rescheduled. Additionally, a game Saturday at Barrie between the Colts and North Bay that had originally been postponed will now be played.