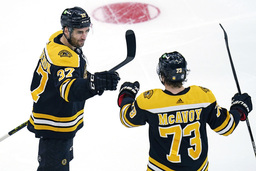 RALEIGH, N.C. (AP) Boston Bruins defenseman Charlie McAvoy made a surprise return to the playoff lineup in Tuesday night's loss to the Carolina Hurricanes after missing a game due to COVID-19 protocols.

McAvoy was a late scratch for Sunday's Game 4 and was set to join injured defenseman Hampus Lindholm in being out. Instead, he hopped on a private flight to North Carolina and was spotted entering PNC Arena, then joined his team for warmups as the Bruins tweeted McAvoy had cleared the protocol.

McAvoy didn't want to discuss specifics of his illness after the 5-1 loss.

"I know a lot of you are going to ask questions about the COVID stuff," McAvoy said. "But I cleared protocol today, so that's where we're at now. I just kind of want to leave it in the past if you guys are able to respect that and we can just talk about the game."

The league stopped testing those without symptoms at the All-Star break, except when necessary for crossing the U.S.-Canada border. According to league protocols, at least five days must have passed since symptoms appeared and a player must test negative to gain clearance to return.

McAvoy played in the Bruins' Game 3 win on Friday night, four nights before Game 5. He declined to say when he felt ill.

"Yeah, I got sick," he said. "I went through it and then made it out the other side and here we are now."

Coach Bruce Cassidy had said earlier Tuesday that McAvoy would be out for Game 5 before learning around lunchtime that he had been cleared to return.

McAvoy, who has key roles on the Bruins' power-play and penalty-kill units, saw more than 25 minutes of ice time and said felt "a little tired."

"We were planning on playing without him," Cassidy said. "It was a nice surprise he got taken out of the protocol to get him in the lineup. You could see that missing some time he wasn't 100%, but he gave it what he had and should be better in Game 6."