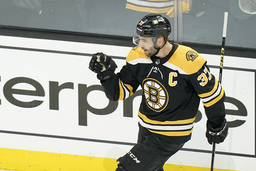 Then he waited around to give each of his own teammates a hug as well as they left the ice - perhaps saying goodbye for the final time.

The Bruins captain, who will turn 37 this summer, is unsigned for next season and has declined to say whether he plans to come back for a 19th season - in Boston or elsewhere.

"That's why this one probably hurts more, the unknown for next year with him," Boston forward Brad Marchand said after the 3-2, Game 7 loss to the Hurricanes on Saturday ended the Bruins' season and sent Bergeron into limbo.

"He's done so much for this group and sacrificed so much," said Marchand, the second-longest tenured player on the roster. "It would have been nice to make a good run for him. So, it's disappointing."

A four-time Selke Trophy winner as the league's top two-way forward, Bergeron is third in the history of the Original Six franchise with 1,216 games played, and fourth with 400 goals, 582 assists and 982 points. He is second in Bruins history with 47 playoff goals and 123 points, helping the team win the 2011 Stanley Cup and return to the Final two other times.

If he retires, he can expect his No. 37 to be retired by the Bruins, and the Hockey Hall of Fame to come calling.

After saying all year that he didn't want to think about the future until the season is over, Bergeron said after the game "It's too early" to make a decision.

"It's too fresh right now," he said in Raleigh, North Carolina. "It still stings from a hard-fought series. Obviously I'm going to have to think about it. I'm not there right now."

If it were up to the team, it wouldn't be a hard decision at all.

"He means so much to this franchise. We all want him back," coach Bruce Cassidy said. "But I have no inkling. I have not addressed it with him."

The Bruins have had a lot of turnover of late, with the core of their three Stanley Cup Final appearances gradually moving on. Longtime captain Zdeno Chara left as a free agent in 2020, David Krecji opted to play at home in the Czech Republic last summer and goalie Tuukka Rask abandoned his comeback from hip surgery in the middle of this season.

Looking to the future, the team has 25-year-old David Pastrnak on offense, 24-year-old Charlie McAvoy on defense and 22-year-old Jeremy Swayman in net. Hampus Lindholm, 28, was acquired midseason to shore up the defense, and Marchand is still one of the league's most dangerous scorers at 33.

Bergeron is expected to take some time to make a decision, and the team will give him the space he needs.

But he said his hugs on the ice in Carolina weren't necessarily a farewell.

"It's tough when it ends like that. I wanted to share with them and thank them for battling every day basically," Bergeron said. "It stings. It's not the feeling that you want. But that being said, we did it together."