Rangers in familiar spot, back home after 2 road losses 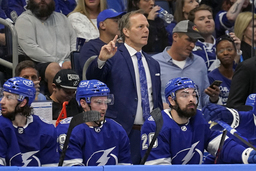 The New York Rangers have been in a similar position before in this postseason - looking to reverse the momentum back home after dropping two games on the road.

In the first round against Pittsburgh, they returned home after falling into a 3-1 series hole and won three straight to advance. In the second round, they were down 2-0 and won four of the next five to move on.

Now they come back to New York tied 2-2 with two-time defending Stanley Cup champion Tampa Bay Lightning in the Eastern Conference final, hoping to turn the tide in Game 5 on Thursday night (8 p.m. EDT, ESPN) at Madison Square Garden. Two of the last three games will be at home, where they've won eight straight.

"I think we're probably in the best spot we've been through three series," forward Andrew Copp said Wednesday. "We got two games at home. I think we play really good at home. ... I think we're all confident where we're at right now but there's got to be an increased level of desperation for sure."

The Rangers will be looking to rediscover the offense that seemed to be rolling along the first two games when they outscored the Lightning 9-4. They were outscored 7-3 in the two games in Tampa.

New York led 2-0 midway through Game 3 before Tampa Bay scored three times to eke out a win. The Lightning then held the Rangers off the scoreboard until late in the third period of a 4-1 win in Game 4 on Tuesday night that evened the series.

The Rangers aren't discouraged by their losses on the road, where they are 2-7 this postseason. They also know what they need to improve on from the last two games - play more physical and do a better job of getting inside scoring chances against Andrei Vasilevskiy.

They expect a boost from playing at home, where the haven't lost since falling in three overtimes in Game 1 of the first round against Pittsburgh.

"It's a best of three in the Eastern Conference finals and it's something to be excited about as a group," defenseman Jacob Trouba said. "We're in a pretty good spot here and we're going to go home and do what we can to win a game."

The Lightning will be looking to build on the momentum they created at home after showing signs of rust at the start of the series following a nine-day layoff after finishing a second-round sweep of Florida. Tampa Bay had won six straight before dropping the first two games against the Rangers.

The Lightning turned it around in this series by tightening up defensively, clogging New York's passing lanes and forcing most of the Rangers' shots to come from outside. The few times they did get close, Vasilevskiy was there to shut the door.

"We've been desperate the last couple of games," Lightning captain Steven Stamkos said. "We knew how important they were to get back in this series, and we've done it. But we can't sit on our hands now and be happy with that. We got to keep moving forward. ... I'm sure now that desperation is going to kick in for them."

Playing with an increased level of urgency, Tampa Bay - which has won 10 straight playoff series the last three postseasons - was also more disciplined in staying out of the penalty box. The Rangers, with the league's best power play in the postseason, only had two chances in Game 4.

"They have an even exceptional power play, and so I spoke to Captain Obvious," Cooper said. "He says if you keep them off the power play, it's probably going to help your game, and he was really right."

Gallant knows simply returning home won't be enough. The Rangers will have to step up their play in Game 5, and they could be without two injured centers - Ryan Strome and Filip Chytil.

Strome missed Game 4 with a lower body injury sustained in the previous game. He skated in pregame warmups but did not play. Chytil left Tuesday night's game just past the midpoint of the second period after a hit by Lightning defenseman Victor Hedman. He missed the rest of the game with an upper-body injury.

"It's gonna be a battle," the coach said. "I mean we're playing against a team that had a lot of experience the last three years and you know they're not going to give it to us. We got to go out and take it and that's what we have to do."