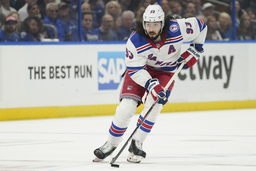 Two days after being eliminated in the Eastern Conference Final, the New York Rangers still haven't gotten over their loss.

"You go on a great run like that, so many people reach out to tell you how proud they are of you, of your group, but right now it stings," forward Chris Kreider said Monday. "It's hard to be proud a couple of days after you get bounced like that."

Linemate Mika Zibanejad agreed, adding: "Hard time thinking about it without getting emotional again and talking about it. It's going to take whatever time to kind of get over this, be able to use this as a motivation going into next year and this summer, but I haven't really dealt with it completely yet."

After a season in which they had a marked turnaround under new coach Gerard Gallant - finishing with 52 wins - the Rangers had an even more remarkable playoff run, winning five elimination games in the first two rounds to reach the conference final. They won the first two games against Tampa Bay and led 2-0 midway through Game 3.

That's when their offense stalled. After outscoring the Lightning 11-4 up to that point, the Rangers were outscored 12-3 the rest of the series while losing four straight.

"I think we ran out of gas," Gallant said. "Not to make an excuse, but when you play 20 games in 40 days at playoff hockey, it's pretty tough. I'm proud of our guys. I think we took major steps and it's going to help us in the future."

Kreider believes the Rangers need to only look at the Lightning team they just lost to, sending the two-time defending champions to the Stanley Cup Final for a third straight year, for inspiration. He referenced when Tampa Bay was swept in the first round of the 2019 playoffs by Columbus and then-Blue Jackets coach John Tortorella said "We've created a monster."

"Obviously, we felt like we could have gone the distance, but that sting is what's going to push us over the edge," Kreider said.

With 26 comeback wins in the regular season and four more in the playoffs, the Rangers embraced the "No Quit In New York" slogan that was on signs, T-shirts and rally towels.

'"No Quit In New York' doesn't mean we will never lose, but the one thing that we didn't do was we did not quit," Zibanejad said. "Didn't matter the situation, we knew we were always going to either bounce back or keep fighting. And I think that's one of the biggest reasons we got so far."

There were plenty of bright spots throughout the season, including Kreider's 52 goals in the regular season and 10 in the playoffs. Artemi Panarin had 96 points (22 goals, 74 assists) during the season and 16 in the postseason, and Zibanejad followed up on his 81-point season (29 goals and 52 assists) with 10 goals and 14 assists in the playoffs. Igor Shesterkin was superb in goal, making clutch save after clutch save all year.

Asked if he viewed the season as a success, Gallant said, "100%," and he was optimistic about the future.

"We got young kids that are getting older," the coach said. "We got a nice window here coming up if everybody keeps developing and playing well. I don't think we have to do a whole lot much different. We're going to see what's going to happen with free agents and stuff like that, but I'm real happy with our group."

Shesterkin had a stellar third season in the NHL, going 36-13-4 with a 2.07 GAA and .935 save-percentage - both tops in the league. The 26-year-old, the favorite to win the Vezina Trophy (top goalie) and a candidate for the Hart Trophy (most valuable player), was the key to the Rangers' success.

"He's outstanding, he gives you a chance to win every night," Gallant said. "He builds confidence to your group - you don't have to be perfect, and there's not a lot of perfect teams in the NHL."

THE KIDS ARE ALL RIGHT

Gallant also had praise for the team's `Kid Line' of 22-year-old Filip Chytil, 20-year-old Alexis Lafreniere and 21-year-old Kaapo Kakko. They made key contributions during the season and had big goals in the playoffs. However, he said he wasn't sure if they'd play together as a line next year or be split up on different lines, depending on roster changes in the offseason.

The Rangers have a long list of pending free agents. Ryan Strome and trade-deadline acquisitions Andrew Copp, Frank Vatrano, Tyler Motte and Justin Braun are all unrestricted. The list of restricted free agents include Kakko, backup goalie Alexandar Georgiev, and Sammy Blais - who was acquired last summer but played only 14 games before an ACL injury ended his season in November.

"There's a lot of free agents and restricted free agents," Gallant said. "(Chris) Drury has a lot of work to do, like every GM, in the next couple of weeks."