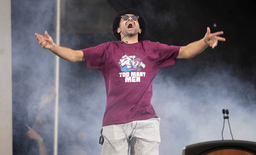 CALGARY, Alberta (AP) Nazem Kadri is going to the Calgary Flames, leaving the Colorado Avalanche after helping them win the Stanley Cup for the first time since 2001.

Calgary announced a $49 million, seven-year contract Thursday, meaning Kadri will count $7 million against the salary cap through 2029. The move came shortly after the Flames traded forward Sean Monahan to the Montreal Canadiens to free up space under the salary cap.

Landing Kadri is the second big deal Calgary has made this offseason, coming about a month after the team acquired Jonathan Huberdeau, MacKenzie Weegar and a conditional first-round pick in a trade that sent Matthew Tkachuk to Florida.

"Nazem is a highly competitive top six player who makes our center ice position deep," general manager Brad Treliving said. "He brings a high skill level and determination to our group combined with his recent experience of a Stanley Cup championship."

The Pacific Division-winning Flames have had to restock their lineup after also losing Johnny Gaudreau in free agency this offseason.

Kadri, who turns 32 before opening night, had arguably his best NHL season in his third year with Colorado. He set career highs with 59 assists and 87 points in 71 games, and that success continued into the playoffs.

The gritty center from London, Ontario, had seven goals and eight assists during the Avalanche's Cup run, sandwiched around a broken thumb he played through in the final against Tampa Bay.

"This is an exciting day for my family," Kadri said. "I couldn't be more thrilled to join such a passionate fan base and organization. I've always loved the city of Calgary and I look forward to giving everything I have to this team."

Kadri was considered the second-best NHL free agent available after Gaudreau, who signed for $68.25 million with the Columbus Blue Jackets.

The Avalanche prioritized bringing back high-scoring winger Valeri Nichushkin, who re-signed for $49 million over eight years, and big defenseman Josh Manson, who got a four-year deal worth $18 million. General manager Chris MacFarland told agent Darren Ferris to keep him in the loop but seemed willing to let Kadri go if he got a better offer elsewhere.

It took him significant time for Kadri to find a destination after the market opened on July 13, which is unusual for top free agents in hockey.

Drafted ninth by Toronto in 2009, Kadri has 556 points in 791 NHL regular-season and playoff games with the Maple Leafs and Avalanche.

Monahan heads to Montreal after spending his first nine seasons with the Flames, during which he has 212 goals and 462 points in 656 games. The 27-year-old has one year left on his contract and represents a $6.375 million cap hit.