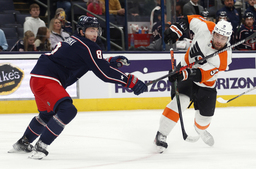 COLUMBUS, Ohio (AP) The Columbus Blue Jackets lost Zach Werenski for the rest of the season with a separated shoulder and torn labrum, the team announced Friday.

The team also said Nick Blankenburg will be out six to eight weeks with a fractured ankle.

Werenski collided awkwardly with the boards attempting a hit on the Flyers' Travis Konecny late in the first period of Thursday's game. Blankenburg was injured midway through the third period but played the rest of the game and scored an empty-netter to seal the Blue Jackets' 5-2 win over Philadelphia.

The Columbus defense also is without Adam Boqvist, who broke a foot in an Oct. 25 home loss to Arizona.

The Blue Jackets' next game is Saturday at the New York Islanders.